Flames from the LNU Lightning Complex fires burn around a sign for a senior center in unincorporated Napa County, Calif., Aug. 18, 2020. The blaze went on to destroy multiple homes near Lake Berryessa as fire crews across the region scrambled to contain dozens of wildfires sparked by lightning strikes.

A year in the making: Exclusive AP interview with Placido Domingo 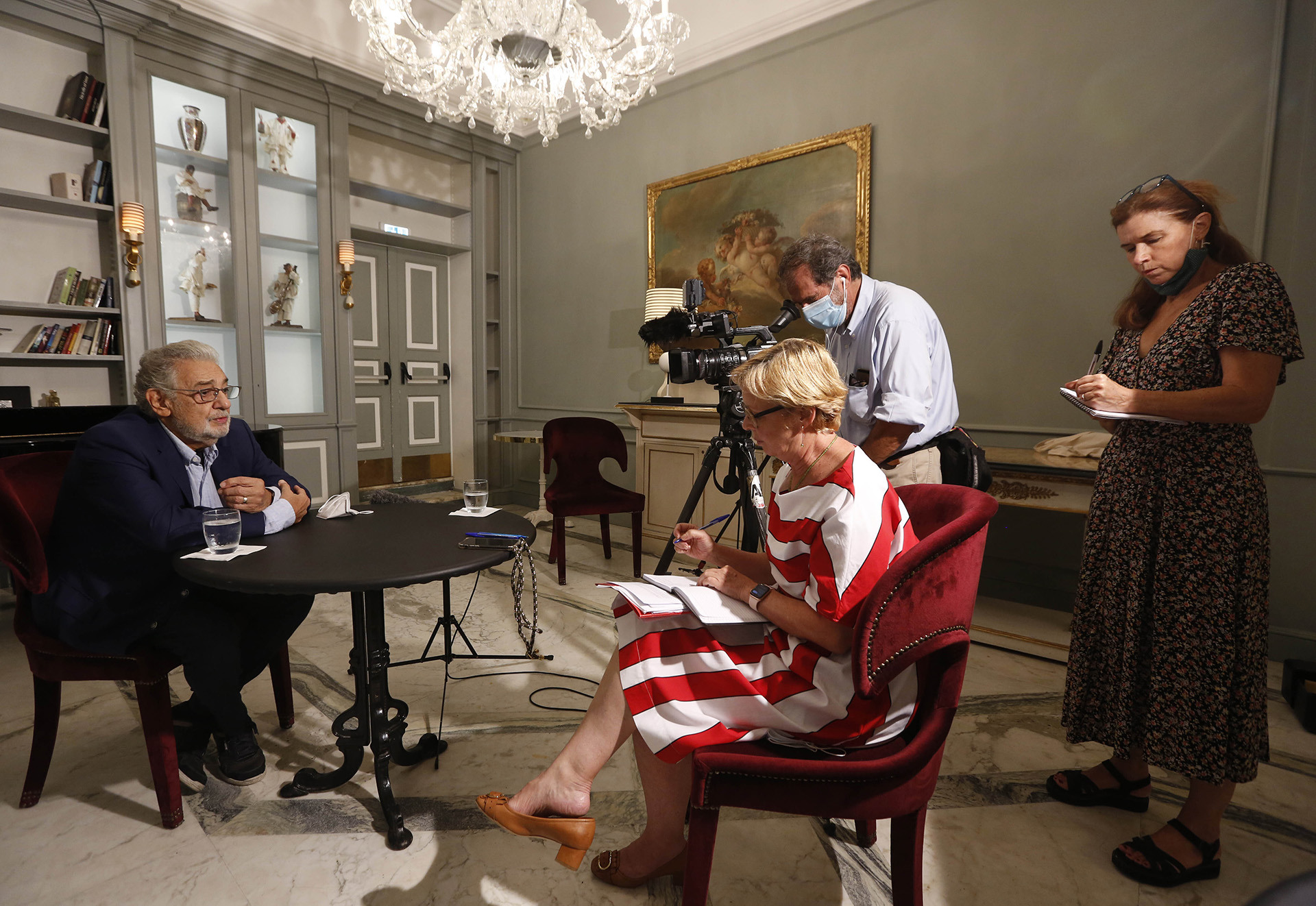 For many observers, a wildfire image sums up the 2020 we are living.

A single wildfire photo by freelance photographer Noah Berger, on assignment for the AP, captured so much: irony, danger and fear amid the worst pandemic to hit the U.S. in more than a century.

The photo, of a sign surrounded by flames, was among AP’s most downloaded images of the month. It resonated so much around the world that Berger was asked by numerous outlets to talk about how he came to shoot it.

To understand why, it's worth considering what the sign says. First, it identifies a center for seniors, the demographic that has been most impacted by the coronavirus. Second, it implores people to wear a mask, practice social distancing and stay safe. Finally, it invites people to “Come join us.” All of that while nearly engulfed in flames.

For many in the U.S. and around the world who see 2020 as one of the most challenging years in recent memory, the photo was widely interpreted as a pointed commentary on the year’s prevailing themes. Here is what Berger said about the photo for the AP’s Definitive Source blog: “It doesn’t take a lot, you just look at that sign and think, ‘That’s 2020.’ That’s a sign of the times that everybody is so freaked out about this one thing and another crazy thing comes on top of it. It didn’t take me long to make that connection even when I was shooting it.”

This week, The New York Times prominently featured Noah’s photo on its homepage with the headline “‘2020 Can Go To Hell’: The Story Behind the Viral Photo That Said It All.”

While that photo certainly stood out, it was just one of many photos by Berger that helped put the AP ahead of the competition in recent coverage of fires in the San Francisco Bay Area. On one occasion Berger came upon a man whose "dream house" had been destroyed. That allowed reporter Adam Beam to interview the man by phone and put together a compelling story. On another day, Berger came upon a llama that had been injured in the fire, and a veterinarian preparing to euthanize it.

Bill Nichols, 84, works to save his home as the LNU Lightning Complex fires tear through Vacaville, Calif., Aug. 19, 2020. Nichols has lived in the home for 77 years.

Flames from the LNU Lightning Complex fires jump Interstate 80 in Vacaville, Calif., Aug. 19, 2020, shortly before the highway was closed in both directions.

Firefighters protect a home in the Berryessa Estates neighborhood of unincorporated Napa County, Calif., as the LNU Lightning Complex fires burn, Aug. 21, 2020. The fires forced thousands to flee and destroyed hundreds of homes and other structures.

Pam, who declined to give a last name, examines the remains of her partner’s Vacaville, Calif., home, Aug. 21, 2020, days after the LNU Lightning Complex fires ripped through the area.

Hank Hanson, 81, describes the path the LNU Lightning Complex fires took in destroying his Vacaville, Calif., home, Aug. 21, 2020. Hanson, who built his “dream house” 30 years ago, does not think he will rebuild.

Finally, it's worth mentioning that Berger also contributed much video each night, clips that have gone into several AP edits that were the most downloaded AP videos in the U.S. last week.

For his courageous and committed work, and a remarkable photo that frames much of 2020 in the context of a raging wildfire, Noah Berger wins AP’s Best of the Week award.