for obtaining agency-exclusive coverage of a magnitude 7.3 earthquake along the Iran-Iraq border that killed more than 530 people. The Tehran bureau worked as a team to secure permissions to travel to the area and provided powerful visuals and stories to tell a story our competitors didn't.http://bit.ly/2zdaySIhttp://bit.ly/2A4m04thttp://bit.ly/2hTNBRe

AP reveals efforts to bring IS to justice for slave trade

spotlighted efforts by international investigators to bring the Islamic State to justice for the slavery and sex trafficking of Iraq’s Yazidi religious minority. The story, which took nearly a year, built on investigators’ documents and El Deeb’s reporting in Iraq and Syria to track down former slaves, owners and those who witnessed the enslavement, all complemented by powerful photos and video of women who had been trafficked.https://bit.ly/2TN6bu9https://bit.ly/2X9imUg Memorial Day: A sister uses her gifts to send messages to fallen soldier

for her all-formats Only on AP narrative timed to Memorial Day, in collaboration with Wisconsin videojournalist Carrie Antlfinger. They told the story of how a violinmaker who lost her soldier-brother in Iraq used her creative gifts to channel her grief and pay unique tribute to him and other veterans. https://www.apnews.com/b3bd6d3791574874839abfba058...

Congressman writes to families of dead troops as 'penance'

scored an exclusive interview with one of the four former Blackwater security contractors pardoned by President Donald Trump for a shooting rampage in Iraq that killed more than a dozen civilians. The interview, the only one granted by any of the contractors, was the result of years of ongoing source work with the contractors’ legal team, who knew that Tucker would be fair and accurate, and that he was intimately familiar with the case from having covered it extensively.

Evan Liberty revealed he was not remorseful for his actions, believed that he had “acted correctly,” and shared details about the moment he learned he had received a pardon, including the three personal items he took with him when he left prison. Tucker made clear the pardons inspired broad condemnation in the U.S. and Middle East and included the perspective of the prosecutors who charged him, the jury who convicted himand the judge who sentenced him. https://bit.ly/3okz4et But AP’s Baghdad correspondent Qassim Abdul-Zahra sensed something unusual was afoot. He alerted colleagues and kept digging, teasing out a name that set alarm bells ringing: Qassem Soleimani, Iran’s top general and one of the Middle East’s most powerful protagonists, might have been in the car.

Soon, from three sources, came confirmation that Soleimani was dead. Regional news director Zeina Karam’s AP alert reached our customers well ahead of the competition and triggered a response by teams, across the region and beyond, that would maintain AP’s edge with all-formats coverage astounding in its breadth, speed and insight.

Usage in all formats was off the charts, both by AP customers and on social channels. The scene is dreamlike – or, more precisely, nightmarish. The untethered camera swoops and swerves through a depopulated wasteland of rubble and bombed-out buildings and wrecked vehicles.

This is Raqqa, devastated capital of the Islamic State group’s self-proclaimed caliphate. And this extraordinary footage – the Beat of the Week – was brought to viewers around the world by freelance drone videographer Gabriel Chaim. He shares the prize with Mideast photo editor Maya Alleruzzo. The idea was bold from its inception: Attempting to count dead and missing migrants worldwide.

After covering the outflow of refugees in the wake of the Islamic State's takeover in parts of Iraq last year, Paris enterprise writer Lori Hinnant noticed a lack of data on the migration. She set off on a mission to count the uncountable.

The yearlong effort to document lives that would otherwise go unnoticed proved extremely challenging, precisely because it was plowing such new ground. An AP team of more than a dozen people painstakingly compiled information that had never been put together before from international groups, forensic records, missing persons reports and death records, and went through data from thousands of interviews with migrants. The data came alive with individual stories of migrants, a challenge in itself.

The AP project found 56,800 dead and missing migrants since 2014, almost double the number currently put out by the United Nations, which focuses heavily on Europe and nearly excludes several other areas of the world. The report drew significant interest, despite the fact that it ran six days before the U.S. midterm elections.

For their ambitious project that established AP as a global authority on this issue, Hinnant, Istanbul visual journalist Bram Janssen and Cairo photographer Nariman El-Mofty share the Best of the Week award. 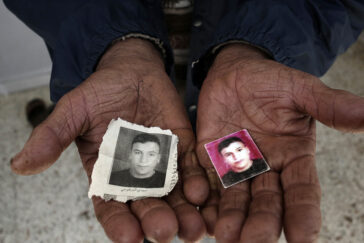 20th anniversary coverage of 9/11 touches all corners of AP

came together in September 2001 for an unprecedented news challenge that ushered in a new era. Twenty years later it reconvened to help make sense of the world that 9/11 left behind. It did so with style, substance and an unerring customer focus — and by harnessing the power of the global news organization.

The early brief called for chronicling the changes in the world without being merely a look back. With that in mind, AP staffers around the world started brainstorming last spring. Robust communication with customers, who wanted their material early, was baked into the process from the outset, as was a platform that showcased content eagerly sought by AP members and clients.Throughout the summer, staffers worked to capture a broad variety of themes: the rise of conspiracy theories, changes in air travel, the experiences of Muslim Americans since 9/11 and the legacy of wars in Iraq and Afghanistan, to name just a few. Newly revealing first-person accounts from AP staffers who were there that day showed what it was like to live through Sept. 11.Longtime Afghanistan correspondent Kathy Gannon took a break from dangerous spot coverage to write the opening installment of the anniversary package, and the “centerpieces” that moved in advance of Sept. 11 represented AP coverage at its very best: global, multiformat, customer-focused and brimming with the expertise of journalists who have covered their respective disciplines for years, if not decades. Each day brought innovative video, compelling photos, insightful writing and a new, richly designed digital presentation bringing it all together.The work was amplified by sharp curation and advance social media work. And on the anniversary itself, AP’s East Region and Washington bureau collaborated to chronicle a nation still in mourning but also moving on. https://apnews.com/hub/9-11-a-...