Reporter Regina Garcia Cano took what could have been a dense, pro forma story on complaints about Baltimore’s “squeegee kids” and turned it into a layered piece about inequality in post-Freddie Gray Baltimore. The timing was perfect, as a way for AP to mark the end of 2020’s Black History Month.

She reviewed figures related to reports on the practice and found one squeegee kid in particular who was willing to open up about the daily grind of dashing into intersections to wash windshields, and how it helped him support his family.

For her keen eye, and a deft hand, on a complicated topic that would have most likely gone overlooked, Garcia Cano wins this week’s Best of the States award. 75 years on, untold stories behind Battle of the Bulge

for revealing untold stories in their exclusive and original coverage of the 75th anniversary of the Battle of the Bulge. Building on years of source-building and skilled storytelling, the all-formats team captured the history and the spirit of the pivotal battle, and made the WWII remembrance fresh and relevant to 21st century audiences.https://bit.ly/2EzrVSbhttps://bit.ly/2tBwv09https://bit.ly/2s4Qaov for one of the first published interviews that Warren Beatty has given in years on the occasion of his new Howard Hughes biopic, "The Rules Don't Apply."

for three exclusives on Missouri gubernatorial candidate Eric Greitens, including a story showing his campaign had access to the donor list of a charity founded by Greitens and that there is significant donor overlap between the campaign and the charity, signaling a potential violation of federal law. http://apne.ws/2eciYE4

A beat on death of Abu Sayyaf commander

for beating local and international media with news that Philippines authorities had killed a key Abu Sayyaf commander. He also broke news that Abu Sayyaf militants were the gunmen troops clashed with in the central Bohol province, where there had been no known Abu Sayyaf presence before. http://apne.ws/2othjuf

Race and Ethnicity team explores question: ‘What is a black life worth?’

In the course of covering protests and a memorial service for George Floyd in Minneapolis, AP race and ethnicity writer Aaron Morrison started thinking about other cases that began over minor offenses and ended with a black person dying. Morrison visited the scene where Floyd took his last breaths, talked to members of Floyd’s family and interviewed protesters with this question in mind:

What is a black life worth?

AP video journalist Noreen Nasir, also in the Twin Cities, was picking up on the same theme in her own reporting. Joined by New York-based photographer Bebeto Matthews, the team took a deep and unflinching look the at the circumstances behind Floyd’s death, and what many see as a pivotal moment in the struggle against institutional racism. Their story led the AP News site, was featured at the launch of the Facebook’s News Feed and was widely used by AP members.

For sharp reporting and analysis that cast George Floyd’s killing in light of systemic issues of race inequality, Morrison, Nasir and Matthews win AP’s Best of the Week award.

for pursuing an interview with Ugandan pop star Bobi Wine, one of Africa’s leading opposition figures. Wine had long been coy about whether he would become a presidential candidate, but after Muhumuza posed the question repeatedly, the singer finally confirmed he would run against long-serving President Yoweri Museveni – while expressing fear for his own safety. https://bit.ly/2Gr49ZK

for using emails obtained through a records request and a lawsuit to show that a Kansas election official had an affair with a woman he promoted and used her to skirt oversight of their lavish expenses before moving on to lead the U.S. Election Assistance Commission. http://apne.ws/2enAAeJ

Deft portrait of America’s divisions, played out on the prairie, draws praise

produced a beautifully rendered, widely read and highly praised portrait of an America divided along political lines, focusing on the editor/publisher of a weekly newspaper and his disgruntled readers in the small prairie town of Benson, Minnesota. The immersive package was among the AP’s most-viewed stories of the week and tops in reader engagement.Read more 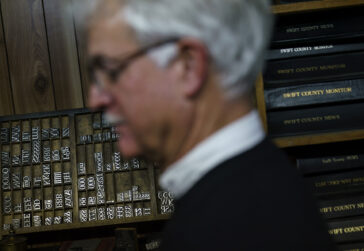 Eddie Pells, Denver-based national sports writer, reported exclusively that a fund jointly run by the NFL and the players union had given out $127 million in health benefits to disabled retired players in 2019, but had gone completely dormant since March, approving no applications and not reimbursing any medical bills. The source for the story, a former player, contacted AP because he was familiar with Pells’ previous reporting and wanted the story to have as wide an audience as possible. Within a day of getting questions from Pells, the NFL scrambled to send a letter to all applicants saying approvals would restart soon. AP was alone with the story, which played on ESPN’s SportsCenter and was used on the crawls of all the major sports networks. https://bit.ly/3c4yFr2