In the days after the Las Vegas shooting that killed 58 people, authorities said gunman Stephen Paddock acted alone. But search warrants showed that police and the FBI were looking at two "persons of interest."

One was Paddock's girlfriend, whom police had cleared, and the other was a man named Douglas Haig of Arizona.

Haig talked to various media, including the AP, and held a news conference characterizing his sale of tracer ammunition to Paddock as a lawful transaction.

But Phoenix newsman Jacques Billeaud wasn’t convinced. He called a source he has cultivated in law enforcement who was willing to help but didn’t know the answer to Billeaud’s questions. Then, a few days later, the official called to say that Haig indeed had been charged with a crime. Billeaud quickly checked an electronic court records system and found that armor-piercing ammunition with Haig's fingerprints had been found in Paddock's hotel room. Haig was charged with illegally manufacturing and selling the ammunition.

Billeaud's relationship with his source put the AP ahead, and customers used the AP as first word on a competitive story. For sticking with the story and using long-term source work to break news, Billeaud will receive this week’s Best of the States prize. AP Exclusive: Texas biker accused of killing man who was shot by police

In the three years since the deadliest biker shooting in U.S. history, Fort Worth correspondent Emily Schmall has meticulously gathered documents, reports and court records to put together a spreadsheet that integrates autopsy reports, firearms analyses and ballistics evidence, including the names and serial numbers of the weapons, to whom they were traced, where they were recovered from and whether they were linked to a death or injury.

Her work paid off last week when prosecutors handed down the first murder charges in the case. Schmall was able to exclusively report that prosecutors had charged one of the bikers for murdering a man who was shot twice by a SWAT officer.

For persistent, investigative reporting that exclusively illuminated potential problems with a shifting strategy in a closely-watched case, Schmall wins this week’s Best of the States. 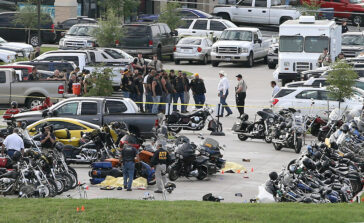