Eugene Garcia, just two weeks into his job as the AP’s newest full-time video journalist, and photographer Jae Hong joined forces to tell the deeply touching and heartbreaking story of often unseen and unsung heroes of the pandemic — the clergy.

The pair approached the story with sensitivity and care, maintaining distance to give the families, patients and chaplains space, but close enough to bring the story to life even as their subjects drew their last breaths. The package, complemented by John Rogers’ moving text, shed light on exhausted and emotionally drained chaplains working in situations they had never experienced before. As one put it, “We weren’t trained for this.”

For an arresting package that explores the compassionate yet crushing work of front-line chaplains, Garcia, Hong and Rogers earn this week’s Best of the States award.

Only on AP: 20 years later, chaplain’s litany of prayers for US troops killed in Afghanistan finally comes to an end

With the end of the war in Afghanistan looming, national writer Matt Sedensky sought a compelling way to humanize America’s longest war — and he found it. Nearly all the American troops killed in the war had their remains returned to Dover Air Force Base in Delaware, where the military runs a mortuary. There, Sedensky found chaplain David Sparks, who had been called to active duty after 9/11, assigned to the mortuary, and had been there ever since.

Sedensky pieced together Sparks’ experience: writing hundreds of prayers for the dead, standing beside their disfigured remains and ministering to their broken families. Joined by New York video journalist Jessie Wardarski and Washington photographer Carolyn Kaster, the team had access to parts of the base hidden far from public view. The resulting package, with Sedensky’s expressive prose and affecting visuals by Wardarski and Kaster, generated a strong response from veterans and non-military alike.

For intimate, revealing work that eloquently writes one of the closing chapters of America’s 20-year war, the team of Sedensky, Kaster and Wardarski earns this week’s Best of the States award. 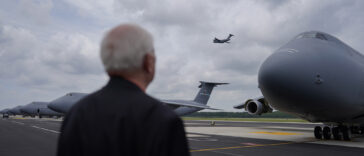