for finding a vantage point that gave them a clear view of the damaged side of the destroyer USS Fitzgerald as it was being pulled into port after colliding with a freighter. http://apne.ws/2sHA3cE

In any year, coverage of the Daytona 500 is a major undertaking that presents challenges. NASCAR’s biggest event stretches nearly two weeks and story planning begins a month in advance.

But this year the AP crew had to adjust on the fly as the story veered in multiple directions. First, President Donald Trump finalized a visit just 48 hours in advance. Then rain fell early in the race, eventually postponing the event until the following day. And finally, a lurid crash just short of the checkered flag resulted in a stunning finish followed by an agonizing wait for news on the condition of driver Ryan Newman.

The AP team never faltered, deftly handling everything Daytona threw at them with informed, precise reporting and outstanding images.

For constantly keeping the AP ahead during a wild weekend, writers Jenna Fryer, Dan Gelston and Mark Long, and photographers John Raoux and Chris O’Meara share this week’s Best of the States award. 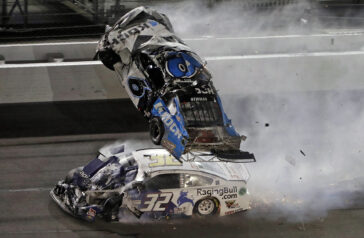 Soccer looks to allow medics to assess concussion on replays

for reporting that doctors assigned to soccer matches could be allowed to watch replays of collisions next season and have the game stopped to assess the potential for concussions. http://apne.ws/2eYhKr7

collaborated on an exclusive all-formats package that revealed how the booming development of clean energy from wind turbines threatens the preservation of iconic golden eagles in the U.S. West. Brown, a veteran environmental reporter, used sourcing, records searches and interviews, finding scientists concerned that collisions with turbine blades could lead to decline of golden eagle populations which thrive on the same open, windy landscapes preferred by wind energy developers.To document the plight of the birds and efforts to preserve them, Brown and video journalist Tobin traveled to remote northern Wyoming, where scientists rappelled down rock faces in their study of the eagles, producing strong visuals to accompany the engaging and deeply reported text story.Read more 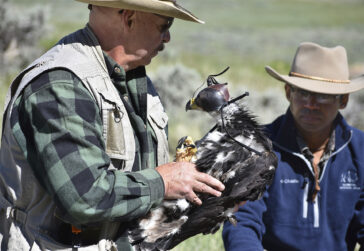