AP: WHO knew of sex misconduct by personnel in Congo

revealed that, contrary to World Health Organization claims, WHO senior management did know about at least two cases of doctors accused of sex abuse and misconduct during the Ebola outbreak in the Democratic Republic of Congo, but did not fire or even apparently discipline them.Health and science reporter Cheng advanced the story by putting names, for the first time, to the implicated doctors and a senior manager. She discovered that WHO managers even witnessed an agreement in which a WHO doctor agreed to pay a young woman he had allegedly impregnated.While Cheng worked with her sources, Congo stringer Kudra Maliro tracked down several alleged victims of both doctors, adding text and images. The investigation was based on interviews with dozens of WHO staffers, Ebola officials in Congo, private emails, legal documents and recordings of internal meetings obtained by the AP.The story drew strong and immediate international response. Paula Donovan, co-director of a group that tracks sex abuse, wrote: “Never ... have I seen such a detailed exposé containing so many unanswerable indictments against so many UN personnel. You’ve broken real ground here.”https://aplink.news/f39https://aplink.video/pk5 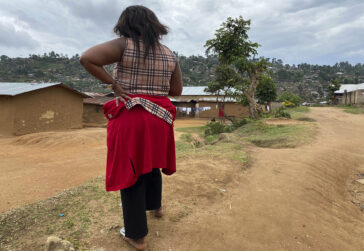 It’s a story so dangerous that the journalists who covered it are still checking their temperatures regulary to ensure that they’re not infected with one of the world’s most lethal diseases. Yet AP’s all-formats journalists helped tell intimate stories about the second-worst Ebola outbreak in history.

The team – Johannesburg Chief Photographer Jerome Delay, West Africa Bureau Chief Krista Larson, Istanbul video journalist Bram Janssen and Congo stringer Al-Hadji Kudra Maliro – had been planning since April to report on the outbreak in Congo, a journey complicated not only by risk of the disease but also the threat of rebel attacks. And their story took on even greater urgency when the World Health Organization declared the outbreak a world health emergency.

Readers, and editors, around the world took notice as the team produced a series of compelling stories from the epicenter of the outbreak.

For careful planning and execution of multiformat coverage that brought the frightening outbreak to a deeply personal level, Larson, Delay, Janssen and Kudra win AP’s Best of the Week. 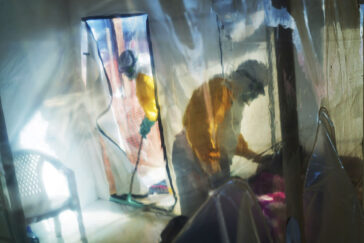 for impressive teamwork and collaboration, using AP’s footprint to tell the story of African immigrants arriving at the U.S.-Mexico border in record numbers. When the migrants started showing up in remote areas of Texas, the immigration beat team deployed Selsky, a former Africa bureau chief. He found many of the African migrants being put on buses to Maine, where Whittle and Amendola picked up the story, covering Congolese and Angolan asylum seekers at a Portland gymnasium converted into a shelter. Selsky also coordinated relevant reporting from Europe, Africa and Latin America. https://bit.ly/2XVjbhc 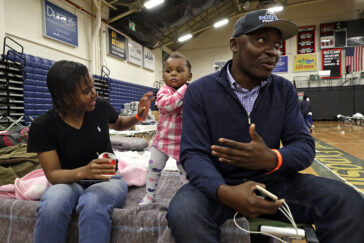