spotted something unusual about the N95 mask shipment they were shown in Southern California in early April – the eagerly awaited masks matched those on the counterfeit warning page of the Centers for Disease Control and Prevention. The pair spent the next few weeks contacting U.S. importers and distributors who were selling and giving away the same Chinese-made masks, informing them the masks were fake while reviewing shipping records, broker contacts, invoices and packaging. Their story about how one brand of counterfeits infiltrated the U.S. supply chain served as an example of how the lack of coordination amid massive shortages plunged the country’s medical system into chaos. https://bit.ly/2XgMxHU 50 years after the US declared war on drugs, AP examines racial disparities

used data and on-the-ground reporting to explore the fallout of America’s war on drugs, launched 50 years ago this summer by President Richard Nixon.Race and ethnicity reporter Morrison, joined by data journalist Kastanis and multiformat journalist Breed, set out to tell a story of the toll that harsh prison sentences and lifetime restrictions post-release have taken on Black and Latino Americans, their families and their communities.To do so, the AP reviewed federal and state data, finding that the Black incarceration rate in America surged from about 600 per 100,000 people in 1970 to 1,808 in 2000, and the rate for the Latino population grew from 208 per 100,000 people to 615, while the white incarceration rate grew at a more modest rate, from 103 per100,000 people to 242.But beyond the data, the AP trio put names and a face to those caught up in this grinding war with no clear winners but many losers. The story’s lead subject, Alton Lucas, could have had a life of touring nationally and internationally with his DJ friend, but instead discovered drugs and the drug trade at the height of the war on drugs. As a crack cocaine addict involved in trafficking, the North Carolina man faced decades in prison at a time when the drug abuse and violence plaguing Black communities were not seen as the public health issue that opioids are today. The combination of Morrison’s deep reporting, Breed’s photos and video, and Kastanis’ data analysis, accompanied by graphics, resulted in a newsy, nuanced package, rich with historical context.https://aplink.news/k6jhttps://aplink.video/017 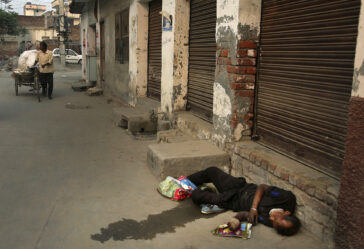 Amid corruption concerns, Gen. Kelly made allies in Honduras

for revealing that White House Chief of Staff John Kelly, while he was the Southern Command commander, forged alliances with Honduran security forces long suspected of corruption in order to win Honduras’s help in the U.S. war on drugs. https://bit.ly/2H9KNe6

AP: Condemned inmate who asked to die by lethal injection killed himself

for being first to report that a condemned inmate who had asked to be put to death by lethal injection, but whose execution had been twice called off by a court fight over the drugs to be used, had killed himself in his prison cell. https://bit.ly/2Qrys51

Only On AP: Bizarre tale of publishing, divorce ... and poisoning?

for carefully piecing together, over the course of a year, a riveting saga about a small-town Arizona publisher who said his estranged wife tried to poison him. He then used his newspapers to publicly shame her even after law enforcement had cleared her and raised questions about his possible use of illegal drugs. https://bit.ly/2PLcz09