for an all-formats look at prescribed burns, one of the most controversial efforts to head off wildfires. After the devastating California wildfires of the last two years, Melley was assigned to find out how prescribed burns, considered one of the more effective ways to stop or slow fires, were being used to clear brush and other fuel. Melley eventually joined a burn in King’s Canyon National Park where he shot photos and video for a story that outlined the firefighting technique and the issues around it. His cross-format package received wide play in California and the West.https://bit.ly/33qc5ENhttps://bit.ly/33OjzBxhttps://bit.ly/2KNVIJm

for being the first to publish the entire text of the U.S.-Russian ceasefire deal for Syria. http://bit.ly/2cCcY66

Unparalleled coverage of a devastating fire in India

for quick and commanding coverage of India’s worst fires in decades, where dozens of workers were trapped in a makeshift factory with little ventilation and only one way out. The team’s work beat not only international news organizations but also many local media, and included a detailed portrait of the tragedy, and the only agency live video coverage.https://bit.ly/2E9DkYLhttps://bit.ly/2qLlJmI 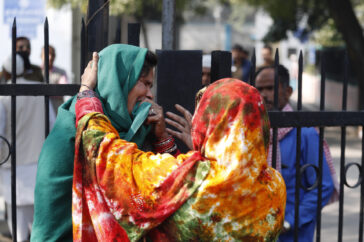 US and Russia broker Syria cease-fire

for breaking news of a US-Russia deal for a cease-fire in Syria, the single biggest outcome of Donald Trump’s first meeting with Vladimir Putin. http://bit.ly/2sybYUv

managed to get where other journalists did not: inside a tragic factory fire that killed dozens of workers who were locked inside the food and beverage factory outside Bangladesh’s capital. Police initially gave a toll of three dead, but the following afternoon firefighters discovered 49 more bodies, many of whom were trapped inside by an illegally locked door.Video journalist Garjon and photographer Opu had scrambled to the scene as soon as the scale of the tragedy became clear. Once there, they got inside the factory and despite intense heat and smoke, captured dramatic scenes of firefighters, with Garjon setting up an exclusive livestream using the Bambuser app on his iPhone as rescuers searched for bodies amid the burning debris. The pair’s video and and still images of firefighters’ efforts and the grim consequences of the blaze set AP's all-formats coverage apart on this latest industrial disaster in Bangladesh.https://aplink.video/196https://aplink.news/yothttps://aplink.video/wsq delivered fast, outstanding coverage as a major fire broke out at Beirut’s port, site of last month’s massive explosion.Ammar was nearby when the fire broke out and within minutes was streaming live video using the Bambuser app. Malla and Tawil also rushed to the scene, Malla shooting stills and sending direct to AP’s Middle East photo desk from his camera while Tawil set up a second live shot. AP was streaming live video for more than an hour before a competitive agency had its live shot up.AP’s video edits were also superior and much faster than the opposition, running quick edits of the fire, helicopters dropping water and two powerful edits shot with a drone, captured by Malla, who deftly switched between his camera and operating his drone to capture aerial photos and videos.And thanks to Ammar’s early response, AP’s news alert moved at least 20 minutes ahead of other major news outlets, further cementing the competitive advantage. for reacting quickly to the news Sunday night that a plane had caught fire on landing at Sheremetevo Airport in Moscow, killing 41 people. Highlighting a strong visual report, AP obtained the first dramatic user-generated video of the plane in flames, ahead of other western agencies and garnering huge client usage. https://bit.ly/306CgOZ

for exclusively reporting that 50 years after America's first space program tragedy, NASA was going to finally display a piece of the burned capsule. http://apne.ws/2kTcSYh

for breaking the news that fired FBI Deputy Andrew McCabe was suing the FBI and Justice Department for news related to his firing. https://abcn.ws/2MMJSQe for working sources to provide the most detailed coverage of the Syria ceasefire deal struck by the U.S. and Russia. http://abcn.ws/2cdUVSd

for obtaining two exclusive police reports that revealed surprising details behind Paris’ deadliest fire in more than a decade — one involving an argument involving a resident said to have a history of psychiatric problems who has been accused of arson, and a second detailing the woman’s arrest after she tried to set a car on fire. Hinnant’s well-placed sources put AP far ahead of other news organizations. https://bit.ly/2DK7NMa

for racing to Nairobi’s Gikomba market early in the morning after getting a tip about a fire, and capturing the first video and first live shots of the disaster that killed 15 people and injured 15, well ahead of Reuters and other competitors. https://bit.ly/2MQwBoZ for their efforts in gaining exclusive access to some of the affected areas and shooting compelling video that captured the physical damage and the personal devastation of the Gatlinburg fires. New York-based Nathan Griffiths produced a 360 video, and Eric Schelzig shot aerial photos while on a flyover tour with the governor. https://apnews.com/b1b36cc743444b3b87a4e646fd1371a8

for an AP analysis that identified $1.2 billion in estimated damage from the flooding and severe weather that affected roughly half the states this year, while also finding that many Midwest states are starting to pour tens of millions of dollars into protections against flooding that is expected to become more frequent and destructive as global temperatures rise. Lieb developed his damage figure by contacting the relevant official in every state that has experienced major flooding or severe storms this year, putting a fresh take on a topic that, when the flooding was occurring, was among the biggest stories in the U.S. https://bit.ly/2TpSi3D