AP teams have again dominated coverage of war in Ukraine on two fronts, this time in horrifying images of civilians killed in Bucha and surrounding areas outside Kyiv, and in stories out of Washington and London, where AP was first with a report that Russian President Vladimir Putin’s aides have been misleading him about the war.

Recently declassified information from a reliable source led to Washington’s scoop that Putin was reportedly “misinformed by his advisors about how badly the Russian military is performing.” AP’s story beat the competition and scored sky-high reader engagement, and a smart follow-up out of London delved into the strategic value of declassifying such intelligence.

On the ground in Ukraine, AP video and photojournalists arrived Saturday in Bucha, outside Kyiv, after Russian forces were ousted. There they found civilians lying dead in the streets, destroyed Russian military equipment and dead Russian servicemen. The following day the AP journalists were first to record the bodies of eight men who were killed execution style, as well as a mass grave and the bodies of a village mayor and her family.

The grim images define one of the darkest chapters on the war so far and raise fears of what may be unfolding in areas as yet inaccessible to journalists.

For their vital role documenting this brutal episode of the war, and for revealing reports of failures in the Kremlin’s intelligence at the highest levels, the journalism of Nebi Qena, Sasha Stashevsky, Vadim Ghirda, Andrea Rosa and Rodrigo Abd in Ukraine, Aamer Madhani and Nomaan Merchant in Washington, and Jill Lawless in London receives AP’s Best of The Week — First Winner honors.

Inside a Lviv apartment building, AP team gives a glimpse of life for displaced Ukrainians

London-based news director Susie Blann wanted to tell the story of how the city of Lviv had welcomed hundreds of thousands of Ukrainians who fled their homes during the Russian invasion but chose to remain in their country.

Blann, joined by photographer Nariman El-Mofty, video journalist Renata Brito and text reporter Cara Anna, looked behind the doors of one Lviv apartment block, earning the trust of people from Irpin, Kyiv and Kharkiv who had found temporary housing there and were willing to tell their stories.

The result was a remarkable presentation produced in collaboration with Natalie Castañeda, giving a deeply personal glimpse into the lives of some of the millions of people displaced by war.

For their tireless, resourceful work in demanding circumstances, the team of Blann, Anna, El-Mofty, Brito and Castañeda is the AP’s Best of the Week — First Winner.

delivered must-read, must-watch stories, adding new layers of depth to AP’s already pacesetting journalism as the Russian invasion of Ukraine grinds into its fifth month.AP journalists in the region, seeking to dispel the notion voiced by Western leaders that global audiences are beginning to experience “war fatigue,” recognized the need for a shift in focus from increasingly incremental developments. They pivoted swiftly to impactful big-picture views of the conflict, all while ensuring competitive coverage of major spot news.Ranging from analysis of the war’s shifting front lines to essential multiformat reporting on longer-term repercussions — the legacy of land mines, the plight of Ukrainian youth, the effect on global food security, among others — and including exclusive video and photos from front-line positions, the AP provided clients and readers with an exceptional body of work over the course of seven days.Read more 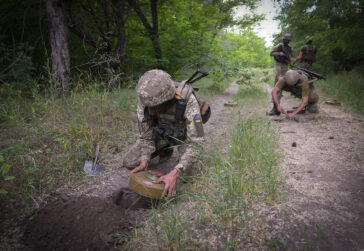