for a followup to an earlier AP investigation identifying a Minnesotan as a former Nazi SS commander suspected in a massacre; the story reported that Poland has asked for the arrest of the 98-year-old. http://www.startribune.com/poland-confir…

for obtaining documents while attending the World Anti-Doping Agency’s meetings in Poland that showed WADA and the IOC were spending large sums to lobby against U.S. legislation that would put criminal penalties in place for large-scale doping operations that affect American athletes. Many attendees at the WADA board meeting learned more from Pels’ story than from the board itself, and the U.S. government representative cited the AP story in a speech chastising the WADA lobbying effort against the legislation.https://bit.ly/32L423Ohttps://bit.ly/2NMFOlq

Coal ash: "Why would we be importing it?"

AP Richmond reporter Sarah Rankin learned from a state lawmaker that Chinese coal ash was being imported into Virginia, despite millions of tons of ash already stored near power plants, threatening surface and ground water with contamination by heavy metals. Like other states, Virginia is struggling with how to dispose of its existing waste.

Her story pinpointed where the overseas ash was coming from: China, India and Poland over the past two years. While the foreign shipments of the industrial byproduct were moving through Virginia to Wisconsin and Ohio, interviews with concrete producers and coal ash recyclers and sellers showed more ash was being imported into Virginia from other states.

One environmentalist raised the irony of the situation: "We have millions of tons of this sitting along our riverbanks. Why in the world would we be importing it from other states and countries?"

For exposing a problematic industry practice with statewide environmental and health implications, Rankin's story wins this week's Best of the States. 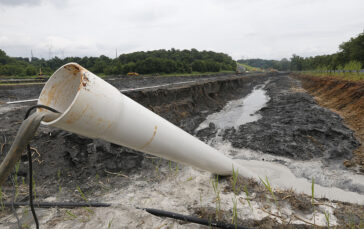