Houston newsman Frank Bajak headed to San Antonio with an overriding goal: Get an interview with a survivor of the immigrant-smuggling nightmare that claimed the lives of 10 people in the suffocating heat of a nearly sealed tractor-trailer.

The challenge was daunting. Survivors had been distributed among seven hospitals in the pre-dawn hours on the Sunday they were discovered in the truck outside a Walmart, with immigration and border patrol guards standing vigil outside their rooms.

Bajak's persistent, resourceful and ultimately successful effort to a secure that exclusive interview is recognized with this week's Best of the States prize. 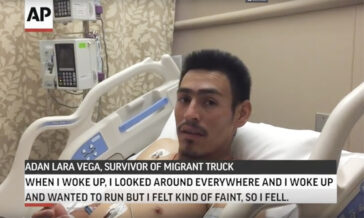