AP’s U.S. staff has a lot of practice in responding to mass shootings. But two major events in 24 hours tested even the most experienced staff.

They rose to the challenge.

Soon after noon Central time on Saturday, Aug. 3, reports began to surface about an active shooter at an El Paso, Texas, mall. A local news station initially reported that 18 people were shot inside a Walmart – a number which by Monday would rise to 22 dead and two dozen injured.

The quick reaction of AP staff around the country and beyond – in the office, at home and even on vacation – ensured the AP was fast, accurate and leading the way on what would become one of the biggest stories of the year. Text, photo and video staffers converged on El Paso, while colleagues around the country worked sources, contributed to the stories and managed the coverage.

Among the standout reporting was an early interview with a woman who told the heartbreaking story of her sister who died while shielding her 2-month-old son – just a small part of the terrific cross-format continuing coverage.

As the Texas team was just catching its breath, reports of another massacre emerged overnight, this time in Ohio. AP’s initial alert was followed four minutes later by the alert that a shooter killed nine people, including his own sister, before police shot him dead. The East Desk immediately dispatched Ohio staff and others to Dayton.

AP beat competitive agencies with photos and numerous live shots, as well as an incredibly compelling interview with a man who watched his father die in his arms. Elsewhere, many of the same supporting cast already working the El Paso story from afar stepped in on Ohio as well, complementing the coverage on the ground.

For its quick, nimble response, precise reporting and robust, cross-format content on two highly competitive breaking stories, the U.S. staff is recognized with this week’s Best of the States award. 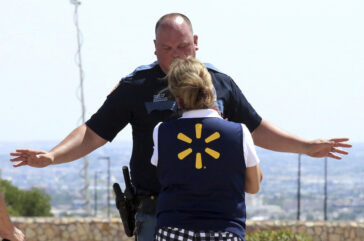 “So long, farewell, auf wiedersehen, adieu,” sang the lead to AP’s Jan. 31 story when, after years of divisiveness and debate, the United Kingdom finally withdrew from the European Union.

The sharp and pithy writing was a highlight of AP’s unparalleled breadth  of journalism, produced by a staff with the depth of talent, experience and knowledge in all formats that would dominate coverage of the historic withdrawal after nearly 50 years.

Video, text and photos staff were deployed to the U.K., including Scotland and Northern Ireland, and to Belgium, France, Gibraltar, Germany and beyond.

AP’s multiformat package captured the emotion and news developments on all sides – from the final lead-up to Brexit to the ceremonies, celebrations and pro-EU vigils on the night itself. And it included exclusives, like the reunion of the two miners – one French, the other British – who shook hands when they broke through to connect the Channel Tunnel nearly 30 years go.

For standout efforts in a continent-wide team effort in which there are too many to name, Jeffrey Schaeffer, Susie Blann, Jill Lawless, Raf Casert, Danica Kirka, Virginia Mayo, Martin Cleaver and Nicolas Garriga share AP’s Best of the Week honors. 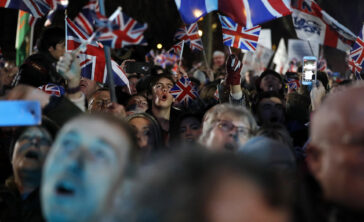 collaborated on an extraordinary portrait of a town grieving after the May 24 mass shooting that left gaping holes in its fabric.In a chaotic and fraught environment with countless journalists gathered around the memorials and overwhelming the family members of shooting victims, the AP trio decided to approach the story differently — they wanted to explore the connections within the Uvalde community. They split up, looking for the people in that next circle of relationships: barbers, bus drivers and others who crossed paths with the affected families.It all came together in a heart-wrenching package that appeared on numerous websites and front pages. The team received compliments from readers — and one of the individuals they profiled — for the sensitive and compassionate way they covered this traumatic story.Read more Rankin and Helber were the first of many AP colleagues to cover the story, and their initial work paid off in significant ways.