Documenting the care of Spain’s most vulnerable generation 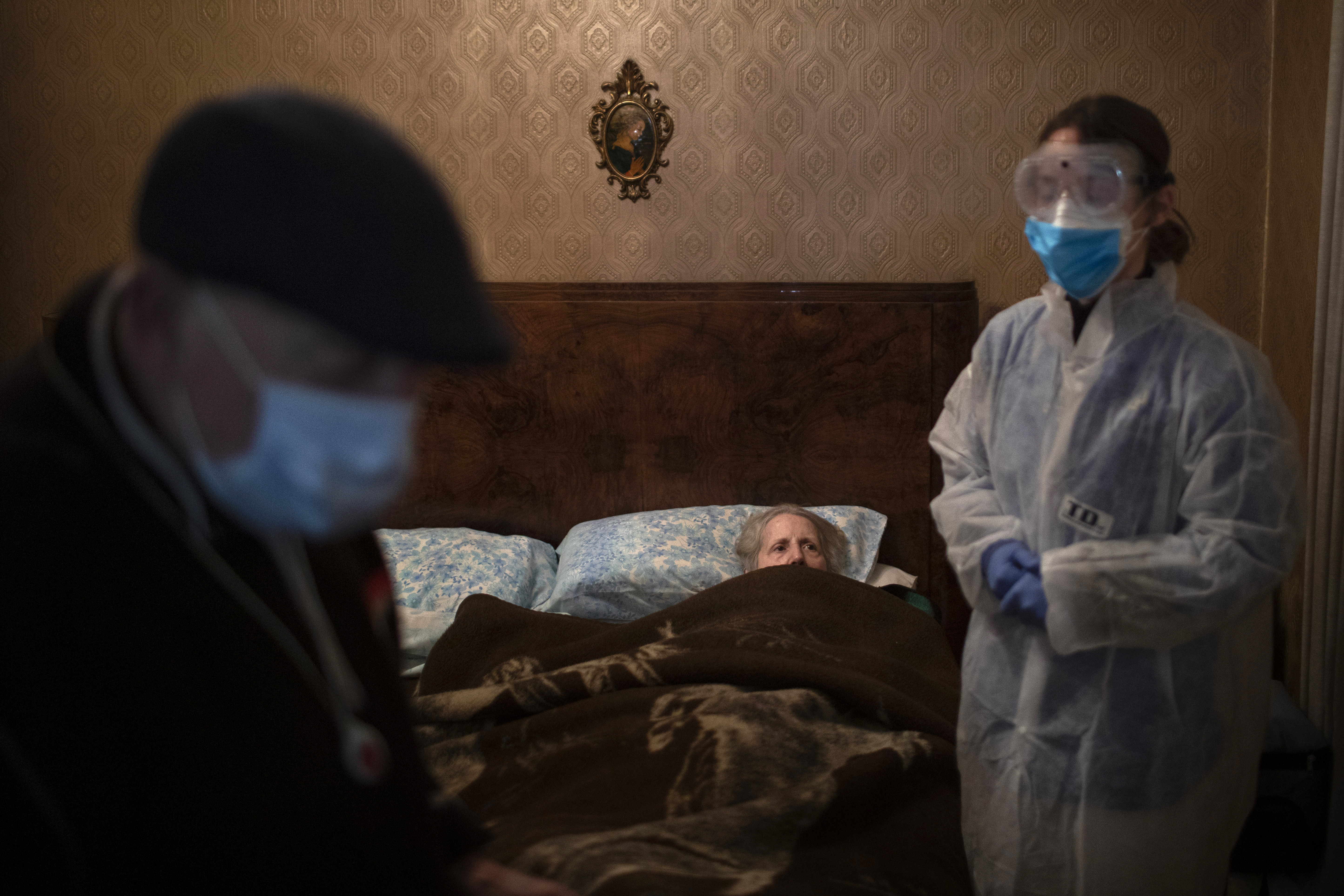 The Associated Press followed 10 New York City residents on Monday, April 6, as they navigated another day in the city assailed by the new coronavirus.

On a day when the coronavirus death toll in New York City crossed a grim threshold, a team of AP journalists fanned out to tell the story of the pandemic through the experiences of average New Yorkers.

From the bodega owner whose remaining customers are often funeral home workers, to a 29-year-old paramedic worried about the way the onslaught of cases was eating away at him and other first responders, the stories provided a vivid account of a city bent, but not broken, by the virus. The result was a testament to the AP at its finest: smart planning and collaboration leading to impactful stories, videos and photos, all delivered to customers with remarkable speed. Less than 60 hours after the last interviews, “The Fight for New York” package was out: 11 text and video stories, more than two dozen photos and nine social edits.

Careful planning went into how to safely pull the package off, starting with journalists suggesting good profile subjects. Then, on April 6, video journalist Robert Bumsted raced between pre-dawn interviews, from a Meals on Wheels worker scrambling to provide food to elderly clients, to the concierge of a luxury building who leaves his family in Staten Island, traveling deserted streets to get to work.

Video colleagues David Martin, Ted Shaffrey and Marshall Ritzel aimed their cameras on subjects in other parts of the city, while photographer Seth Wenig spent hours in Times Square on a time lapse that drove the desolation home. Fellow photographers John Minchillo, Matt Rourke, Bebeto Matthews and Mary Altaffer made portraits of their subjects from a safe distance.

Night concierge Joe DeLuca poses at the front desk of a luxury apartment building in New York, April 6, 2020. While tens of thousands of New Yorkers work at home during the COVID-19 pandemic, people like DeLuca keep the city running amid the lockdown.

Joe DeLuca at work as night concierge at CitySpire, a luxury high-rise on West 56th St. in New York, April 6, 2020. While tens of thousands of New Yorkers work at home during the COVID-19 pandemic, DeLuca says: “I’m here, and I want to be here. I have one family at home and this is my second family. I love the people here, and I want to help the families as much as I can while still being safe.”

Carla Brown, executive director for the Charles A. Walburg Multiservice Organization, arrives to pick up meals from a caterer in the Queens borough of New York, April 6, 2020. The coronavirus pandemic has made younger family members fearful of bringing the disease to older relatives. That’s driven Brown to make sure those elderly are receiving the care they need through her meals-on-wheels program.

Carla Brown, executive director for the Charles A. Walburg Multiservice Organization, arrives to pick up meals for her meals-on-wheels program from a caterer in the Queens borough of New York, April 6, 2020. Brown’s program was delivering about 700 meals per day to seniors in the Harlem and Washington Heights sections of New York until about two weeks ago. That total is now above 900.

Emergency room doctor Dr. Joseph Habboushe, who is taking on the challenge of treating patients with the new coronavirus at a New York hospital, poses for photos in New York, April 6, 2020. “It feels very appropriate that I get to be on the front lines and try to fight this war,” he says. “We’re all in this together, and we’re all in with our patients,” he said.

Emergency room doctor Dr. Joseph Habboushe, who is taking on the challenge of treating patients with the new coronavirus at a Manhattan hospital, is photographed in New York, April 6, 2020. He says health care workers are all in the fight together.

Funeral director Jesus Pujols holds a mask in one of the funeral homes he works with, during his second shift of the day in the Brooklyn borough of New York, April 6, 2020. Pujols was sleeping in the same minivan he uses to transport bodies, just hoping he can keep up with the demand for his undertaking services as the new coronavirus ravages his city.

Funeral director Jesus Pujols is photographed in one of the funeral homes he works with, during his second shift of the day, April 6, 2020. He thinks he worked nearly 80 hours the previous week, but he hasn’t really kept count. “Right now, money is not worth it. It’s not worth it,” he said. “I would give up my job any day for like a normal, normie job. I’d much rather be quarantined in my house right now.”

Rabbi Sharon Kleinbaum poses at the door to her apartment in New York, April 6, 2020. Kleinbaum was installed in 1992 as rabbi of Congregation Beit Simchat Torah in Manhattan – it’s considered the largest LGBT synagogue in the nation, and AIDS was killing thousands of gay New Yorkers each year when she took the job. That experience has given her strength as New York now faces the coronavirus outbreak.

Rabbi Sharon Kleinbaum poses at her apartment in New York, April 6, 2020. In 1992, at a time when AIDS was killing thousands of gay New Yorkers each year, Kleinbaum was installed as rabbi of Congregation Beit Simchat Torah in Manhattan, considered the largest LGBT synagogue in the nation. “The CBST community knows what it takes to live through a plague,” Kleinbaum said in a message posted on the synagogue’s website after New York became an epicenter of COVID-19.

Actor E. Clayton Cornelious poses at the Imperial Theatre in New York, April 7, 2020. For Cornelious, with Broadway shut down by the coronavirus, being isolated in his Bronx apartment has been difficult. But he and the cast of the hit musical, “Ain’t Too Proud: The Life and Times of The Temptations” have been trying to keep each other amused by posting memes and jokes.

Paramedic Travis Kessel is photographed outside his station house after working a shift in the midst of the COVID-19 pandemic, April 6, 2020, in the Bronx borough of New York. Kessel never imagined his work could hurt this much. He loves his career in emergency services. It's even how he met his wife, an emergency room nurse. But now he worries about the toll the new coronavirus is taking on both of them and their colleagues.

Paramedic Travis Kessel outside his station house after working a shift in the midst of the COVID-19 pandemic, April 6, 2020, in the Bronx borough of New York. With the peak of the pandemic still to come, Kessel said: “These next two weeks are going to be really trying. I just hope that these projections are right and that we’re going to start a downturn, because it takes its toll already and every day that goes by takes a little bit out of you that you don’t know if you’re going to get back.”

Television host and journalist Sara Haines sits for a photogrpah in her lobby after working from home due to COVID-19 concerns, April 6, 2020, in the Brooklyn borough of New York. Haines isn't afraid to tackle serious subjects and has done so often as a co-host on “The View.” Monday felt different. Confined to her home, she broadcast a segment from her living room couch about grief, compassion and loneliness.

Eudis Batista, right, co-owner of Deli-licious delicatessen in Queens borough of New York, takes an order from a customer keeping distance at the store on April 6, 2020. In the days of coronavirus and sheltering in place, “it's been a ghost town,” said brother and co-owner Alex Batista.

Owners Alex Batista, left, and his brother Eudis Batista work together at their store, Deli-licious delicatessen in the Queens borough of New York, April 6, 2020. The first week the city was shutdown, Batista says his business fell 60%. Now, deliveries have propped it back up some. But three or four more months like this and they’ll have to close the shop, unsettling one 85-year-old customer who counts it as pretty much the only place still open for food. “You know what?” Eudis Batista told the man. “Even if we close down, if I have to go to my house and cook food for you, I’ll do it for you. No problem.”

Taxi driver Nicolae Hent cleans and disinfects his cab before starting work in New York, April 6, 2020. Yellow-taxi drivers have fallen on hard times in recent years with the arrival of ride-sharing companies such as Uber and Lyft. But the empty streets during the coronavirus pandemic have made things even tougher.

Taxi driver Nicolae Hent cleans and disinfects his cab before starting work in New York, April 6, 2020. It will take more than an hour before he lands his first fare in a city besieged by the coronavirus pandemic, but he knows where to find it – Mount Sinai Hospital. “That’s where the customers are now,” says Hent, who is 63 and has been driving a cab since 1988.

Taxi driver Nicolae Hent, wearing a protective mask, poses for a photograph before before starting work in New York, April 6, 2020. Even before the coronavirus pandemic, ride apps like Uber had punished the taxi trade, but he could still count on making $300 a day. Now, in the midst of the coronavirus pandemic, there are no office workers flagging him down at evening rush, no crowds heading home from ballgames. He’ll be lucky to make $100, mostly carrying nurses and doctors.

Text reporters Deepti Hajela, Jennifer Peltz, Jake Seiner, Brian Mahoney, David Porter and David Crary conducted interviews, feeding material to national writer Adam Geller, then turned to producing 10 mini-profiles of their subjects. Working with editor Jerry Schwartz, Geller took the mountain of reporting and wove it into a vivid 3,000 word portrait of New York on the day when the virus’s death toll surpassed that of the Sept. 11 terrorist attacks.

The field reporting was supported by journalists throughout the company devoted to giving “The Fight for New York” the best presentation and promotion possible. Luke Sheridan and the video team furiously cut video, producing cohesive edits from a combination of staff-shot footage, Zoom interviews and user-generated content. Darrell Allen edited social videos and Chris Hulme distilled the footage into an online edit.

Alyssa Goodman handled images for the 11-story package while Raghu Vadarevu and the enterprise team, including Dario Lopez and Natalie Castañeda, worked on its presentation. Jaime Holguin produced a coronavirus podcast to coincide with the project’s release and Alina Hartounian crafted a social media plan that both previewed the package and kept it alive throughout the day. Sara Gillesby, David Caruso and Howie Rumberg coordinated the project from its earliest stages through publication.

THREAD: The @AP fanned out across New York City on Monday, following 10 residents as they try to protect themselves in a city under siege by the coronavirus. Here are their stories. https://t.co/C5Cw8rFauV

The resulting package immediately resonated with readers, viewers and customers. CNN and Fox promoted it and “The Fight for New York” won play on the websites of most major news organizations. The Los Angeles Times used elements, giving it their own presentation. The videos were used more than 900 times, led by the main newsroom edit that weaved the stories together.

For extraordinary teamwork, planning and execution, the team of journalists behind “The Fight for New York” wins AP’s Best of the Week award.

For AP’s complete coverage of the coronavirus:

– AP’s hub for comprehensive all-formats coverage of the virus outbreak.

– One Good Thing: daily stories of hope and humanity amid the crisis.