A firefighter passes a burning home as the Hillside fire burns in San Bernardino, Calif., Oct. 31, 2019. Strong winds were fanning new fires in Southern California, burning homes and forcing residents to flee in a repeat of a frightening scenario already being faced by tens of thousands across the state. 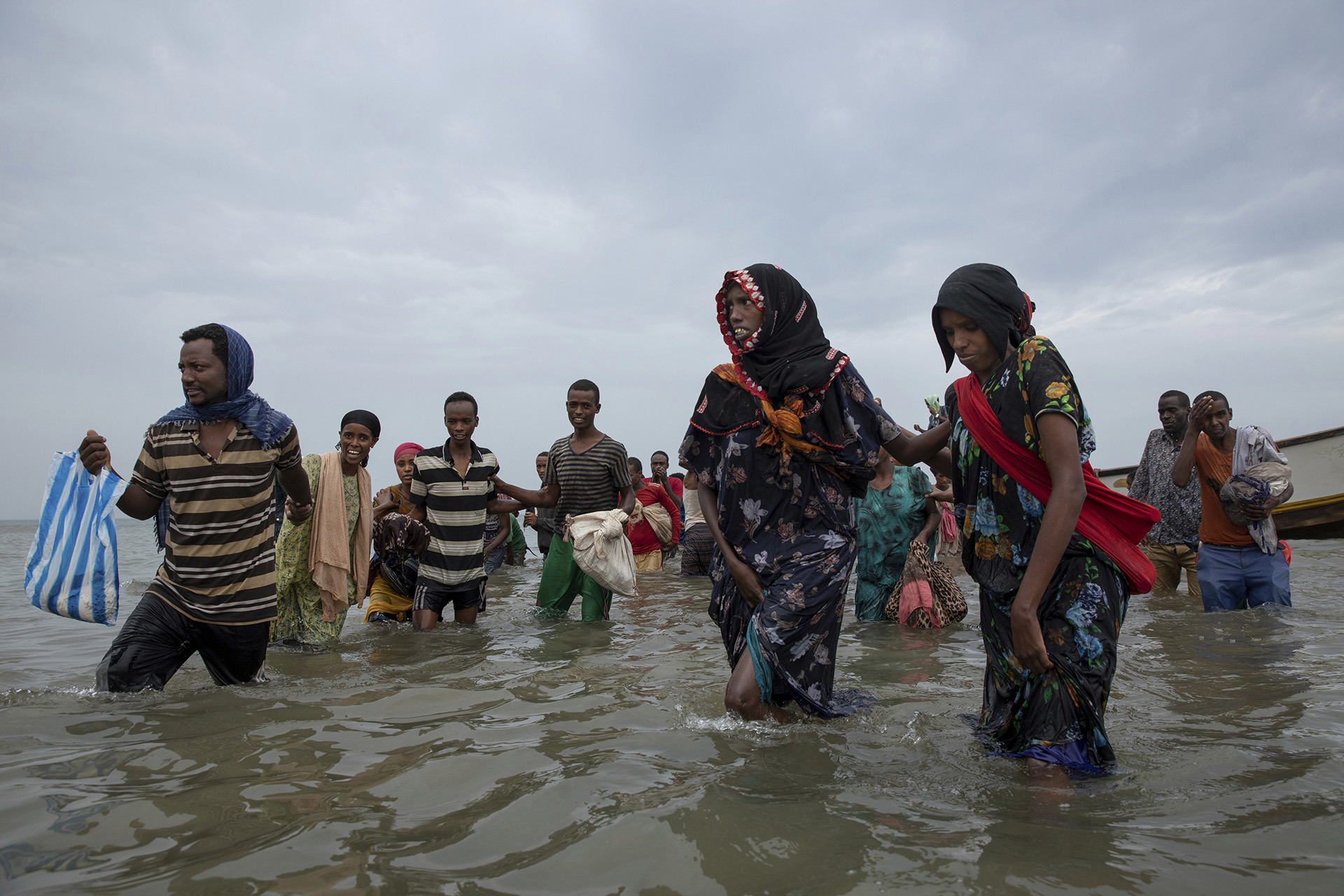 For a week straight, AP delivered an unmatched combination of photos, video and text chronicling raging wildfires and blackouts affecting millions of Californians.

When two burning tree limbs crashed in flames on the exact spot where Marcio Sanchez had been standing just moments earlier, the shaken AP Los Angeles photographer called two colleagues to check that they both had his wife’s phone number, figuring that “if something happened to me, they could tell her.” Despite his near-death experience, he then plunged back to work, capturing vivid images for AP clients of furious wildfires tearing across swaths of California.

Elsewhere in the state, veteran wildfire photographer Noah Berger sped down flame-lined roads in his Nissan Xterra, trailed by a reporter from The Wall Street Journal who documented how the photographer, a Pulitzer Prize finalist for his images of California fires in 2018, again tore from blaze to blaze to document for AP the latest raging fires that impacted millions.

While shooting the crackling flames, Berger always keeps his engine running, the Journal noted, because “there might not be enough oxygen to start it again.”

A firefighter sets up to fight the Getty fire as a home burns on Tigertail Rd. in Los Angeles, Oct. 28, 2019.

Firefighters try to save a home on Tigertail Rd. in Los Angeles during the Getty fire, Oct. 28, 2019.

Henry Provencher, 87, is wheeled out of Redwood Retreats, a residential care facility, by owner Eric Moessing while evacuating due to the Kincade Fire in Santa Rosa, Calif., Oct. 26, 2019. The evacuation order encompassed a huge swath of wine country stretching from the inland community of Healdsburg west through the Russian River Valley and to Bodega Bay on the coast.

Embers fly across a roadway as the Kincade Fire burns through the Jimtown community of Sonoma County, Calif., Oct. 24, 2019.

Fire crews walk along a blackened ridge as they battle the Getty fire in Los Angeles, Oct. 28, 2019.

Morgan Clark, a firefighter with the Oxnard Fire Dept., hoses down hot spots created by the Easy Fire on a farm in Simi Valley, Calif., Oct. 30, 2019.

Flames consume a home as the Kincade Fire tears through the Jimtown community of Sonoma County, Calif., Oct. 24, 2019.

A helicopter prepares to drop water while battling the Kincade Fire near Healdsburg, Calif., Oct. 29, 2019. Millions of people were without power for days as fire crews raced to contain two major wind-whipped blazes that destroyed dozens of homes at both ends of the state: in Sonoma County wine country and in the hills of Los Angeles.

A firefighter pauses while mopping up at a home leveled by the Hillside Fire in San Bernardino, Calif., Oct. 31, 2019.

Sodhi Singh closes up his Chevron station shortly after losing power in Healdsburg, Calif., Oct. 26, 2019. A Northern California wildfire forced evacuation orders and warnings for nearly all of Sonoma County stretching to the coast, with forecasts of strong winds prompting Pacific Gas & Electric to cut electricity for millions of people in an effort to prevent more fires.

Sodhi Singh, right, and Navneet Singh close up their Chevron station shortly after losing power in Healdsburg, Calif., Oct. 26, 2019. Pacific Gas & Electric was cutting electricity for an estimated 2.35 million people due to forecasts of extreme winds and fire danger.

A customer walks past a section of spoiled frozen foods, taped off at Big John’s Market in Healdsburg, Calif. shortly after the store reopened, Oct. 31, 2019. Power was restored to the family-owned grocery store after being turned off for four days in an attempt to stem fires caused by wind-damaged power lines.

A charred statue stand among ashes in front of a home destroyed by the Kincade Fire near Healdsburg, Calif., Oct. 31, 2019.

A firefighter sprays water as flames from the Hillside Fire threaten a residence in San Bernardino, Calif., Oct. 31, 2019. The blaze, which was touched off during red flag fire danger warnings, destroyed multiple residences.

Wind whips embers from a tree burning during a wildfire in Riverside, Calif., Oct. 31, 2019. Santa Ana winds were expected to linger for a final day after driving more than a dozen wildfires through California.

Justo and Bernadette Laos hug while looking through the charred remains of the home they rented which was destroyed by the Kincade Fire near Geyserville, Calif., Oct. 31, 2019.

Pamela Zuzak, 70, reflects on her experiences being stranded in the dark during the power blackouts at the Villas at Hamilton housing complex for low income seniors in Novato, Calif., Oct. 30, 2019.

Justo and Bernadette Laos show a photo of the home they rented which was destroyed by the Kincade Fire near Geyserville, Calif., Oct. 31, 2019.

A friend of Bernadette Laos displays jewelry salvaged from her home, destroyed by the Kincade Fire near Geyserville, Calif., Oct. 31, 2019.

Firefighters rest at outside a cardboard box factory that burned down during a wildfire in Riverside, Calif., Oct. 31, 2019. Several blazes broke out in the heavily populated inland region east of Los Angeles as the strong, seasonal Santa Ana winds continued to gust up to 60 mph (96 kph).

Firefighters work amid the smoldering remains of a home burned by the Hillside Fire in San Bernardino, Calif., Oct. 31, 2019.

Firefighters from Dry Creek Rancheria remove an American flag as the Kincade Fire bears down on Healdsburg, Calif.,Oct. 27, 2019.

Flames from a backfire, lit by firefighters to slow the spread of the Kincade Fire, burn a hillside in Sonoma County, Calif., near Geyservillle, Oct. 26, 2019.

Inmate firefighters battle the Kincade Fire in Sonoma County, Calif., near Geyservillle, Oct. 26, 2019. About 90,000 residents were ordered to evacuate as extreme winds threatened to spread the blaze.

On top of their lenses and other camera gear, Sanchez, Berger and San Diego-based photographer Greg Bull also carried gas masks to enable to them to breathe in the choking smoke, fire-resistant overalls, heavy boots and — for a worst-case scenario — portable fire shelters they can climb into as a last resort should they become engulfed by the deadly flames.

Along with reporters Don Thompson and Janie Har, whose compelling text coverage included an exclusive report documenting how 20 frail seniors were trapped for two days in the dark by a fire-related power outage, Sanchez, Berger and Bull win Best of the Week honors for their standout work in a fantastic team effort by AP staff in California that provided gripping, competitive coverage for AP clients in all formats.

A tip from a caller led Har, based in San Francisco, to the low-income apartment complex in Northern California where she and photographer Eric Risberg found the seniors with wheelchairs and walkers fending for themselves in the dark and where one woman in her 80s tripped over another resident who had fallen on the landing in a steep stairwell.

From Northern California’s Sonoma County, where 200,000 people were told to pack up and leave, many in the middle of the night, Sacramento-based Thompson filed a steady stream of compelling first-person accounts, one from a man who two years earlier had to run for his life when the so-called Wine Country Fire moved with lightning speed in the middle of the night. This time he grabbed clothes and hit the road before flames closed in.

Berger had sensed months earlier, from tinder-dry leaves that crunched underfoot when he was walking his dog, that the blazes which regularly blight California might soon be back. He was already in place when winds whipped up the fire in Sonoma County, having traveled there days earlier. From a safety zone he mapped out in advance, Berger watched as flames swept down a hill toward him.

Berger always keeps his engine running, The Wall Street Journal noted, because “there might not be enough oxygen to start it again.”

In the midst of the hellish flames, Berger shot image after image. The dramatic photos were the earliest from the scene and vividly conveyed the terrifying ferocity of the winds and fire.

Later in the week, the winds shifted south and Berger followed them, driving through the night to get in place for a series of fires in and around Los Angeles that threatened the Ronald Reagan Presidential Library and J. Paul Getty Museum. One night, Berger had 12 minutes of sleep before getting a heads up from a fire source to move to another fire that was threatening homes and forcing evacuations.

Sanchez joined Berger on the fire lines and both filed overnight video that carried AP into the morning, when reinforcements arrived, allowing AP to provide round-the-clock video coverage of wildfires.

Sanchez, who has covered wildfires for nearly two decades, never skipped a beat even after his narrow, unsettling escape from the flaming branches that missed him only through a stroke of luck. He’d left that spot just minutes earlier because he’d forgotten his helmet and fire shelter in his car and was walking back to get them, a harrowing tale he shared with AP clients and readers in a gripping first-person account.

Bull churned out both photos and video, producing a remarkable five video edits on Oct. 30 alone and, with photographers and videographers John Mone, Terry Chea and Krysta Fauria, ensuring comprehensive video coverage for AP clients throughout the week.

The engrossing, all-formats coverage was among the most popular on AP all week. Photos from Berger, Sanchez and others regularly appeared in The Washington Post, The New York Times and numerous other publications and websites. Har’s story was No. 4 for AP and was matched by the local San Francisco ABC affiliate.

For their extraordinary work during a hectic and dangerous week, Sanchez, Berger, Bull, Thompson and Har share this AP’s Best of the Week.