for their reporting that showed there are more than 6.3 billion dead trees around the West fueling this year’s wildfires. http://bit.ly/2xQRQzZ

used government air pollution data, academic studies and interviews to report exclusively that the western wildfires exposed at least 38 million people in five states to unhealthy levels of smoke, causing emergency room visits to spike and potentially thousands of deaths among the elderly and infirm. The all-formats package included the experience of an Oregon woman whose smoke-triggered asthma attacks twice sent her to the emergency room.https://bit.ly/34hvDgShttps://bit.ly/3m6yeR0 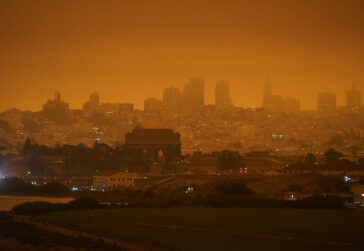 teamed up across formats, beats and states, drawing on AP resources throughout the West to dominate coverage of the high-profile Northern California wildfires that threatened an international gem, Lake Tahoe.Striking photos by Noah Berger and Jae Hong captured the drama as the fire raged toward the resort city and a vast swath of the Sierra Nevada. Report for America journalist Sam Metz was indefatigable on the ground, interviewing rescue workers, residents and firefighters, then capturing the chaos of the evacuation. Reporters John Antczak, Janie Har and Jocelyn Gecker worked the phones from Los Angeles and San Francisco providing detail and context as they wrote the spot stories. Video journalist Terence Chea and Michelle L. Price reported on people who refused to leave.For this latest in a series of major blazes, the West region dug to identify wildfire-related stories of interest beyond the breaking news, including Tom Verdin’s story on the special sites that were threatened, Don Thompson’s assessment of what went wrong in fighting the blaze, Brian Melley’s report on canceled vacations nationwide and a piece by Metz and Scott Sonner on price gouging.https://aplink.news/rwdhttps://aplink.news/qo4https://aplink.news/slxhttps://aplink.news/cp0https://aplink.video/4jlhttps://aplink.video/a3bhttps://apnews.com/hub/wildfires The Class of 2020: Stories of resilience amid crises

produced in text and video a compelling look at members of America’s high school Class of 2020, focusing on eventful lives shaped by a series of crises.

Irvine, collaborating with colleague Stephanie Mullen, set out to tell the story of a generation born in the aftermath of Sept. 11 that has faced a number of challenges – from the loss of a parent to wildfires and hurricanes, the Great Recession and, most recently, a pandemic and civil unrest over police brutality.

The result was a multiformat package with stunning portraits and a print story that took the reader through the graduates’ stories in order of the events that have impacted them. Irvine also produced a video that featured several photos interspersed with self-shot video of three of the graduates.https://bit.ly/37jR80ihttps://bit.ly/3cTBASh definitively examined, from six continents and in all formats, the impact of climate change, merging the science behind a major — and sobering — United Nations report with the voices of people who are living it.Weeks before the Feb. 28 release, climate news director Peter Prengaman, reporters Seth Borenstein and Frank Jordans, both veterans of climate coverage, and Stockholm-based video journalist David Keyton brainstormed the plan, putting AP’s global footprint to use: Instead of just one big, all-formats story — the norm for previous reports by the Intergovernmental Panel on Climate Change — AP would use the report as a jumping-off point to explore the state of climate change from each continent. Read more 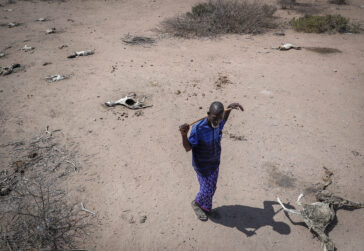 AP staffers displayed remarkable professionalism and composure under extraordinary circumstances in their coverage of the Nov. 14 mass shooting at Saugus High School in a Los Angeles suburb.

LA photographer Marcio Sanchez found himself in a nearly unfathomable position: He was making news photos outside a high school where a gunman had opened fire while one of his sons was locked down inside. Later, when Sanchez was safely home with his 15-year-old son Noah, his longtime LA colleague, reporter Brian Melley, did a sensitive interview with the teenager about his experience during the shooting and lockdown.

Meanwhile, veteran breaking news staffer John Antczak in the LA bureau reported the shifting numbers of casualties with careful sourcing and attribution, anchoring the coverage and avoiding the false reports put out by some media.

AP’s full complement of all-format coverage was the product of excellent reporting and editing by staffers in the field and in the bureau. That team effort was highlighted by the remarkable work of Sanchez, Antczak and Melley, who earn this week’s Best of the States award. 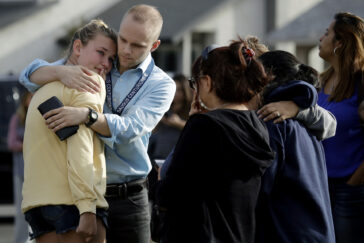