ensured that video coverage of the pope’s recent five-day trip to Greece and Cyprus was comprehensive and virtually flawless, giving AP an edge over the competition.Working from the pope’s complex schedule, the two senior producers — Murru in Rome, Tsongas in Athens — began advance work in August. Their meticulous planning and smart deployments of AP video journalists from European bureaus meant that AP had cameras in all the right places, live coverage of all the main events and coordination with other agencies and host broadcasters for pool material.As the pope plane-hopped from Cyprus to Athens to Lesbos and back to Athens, AP provided unrivaled live and edited coverage, including unscheduled incidents, such as the Orthodox priest heckling the pope in Athens and two Italian exchange students convincing him to pose with them for a selfie. Murru also had the foresight to work from the Athens press center during the pope’s visit to Lesbos, making AP the only agency to deliver video that wasn’t part of the pool coverage, including key footage of the pope greeting people in a migrant camp on the island. In all, the team produced some 60 video edits during the trip.The video planning and production paid dividends in logistics and content for other formats as well; AP writers enhanced their stories with color and comments pulled from the footage.https://aplink.video/kyehttps://aplink.video/tnvhttps://aplink.video/ym5 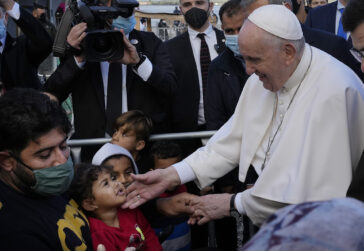 for using a 360 camera to give readers an immersive experience of the battle for Mosul.

for delivering fast and unmatched video on back-to-back disasters in Japan last week, including user generated content showing the devastating strength of Typhoon Jebi, and for multiple edits, well ahead of video competition, of a powerful Japanese earthquake and deadly landslides. https://bit.ly/2p48SHYhttps://bit.ly/2CUme3hhttps://bit.ly/2MwhWyn 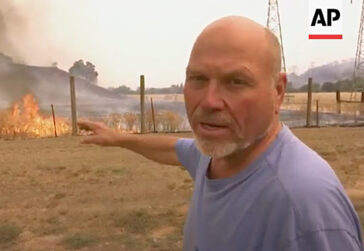 for capturing exclusive video of a police van ramming into protesters. Calupitan was able to get to a higher vantage point as tensions rose, allowing him to show the full view of the incident.

for quickly getting two exclusive video clips that helped give AP a major edge on the story of Best Actress winner Frances McDormand’s stolen Oscar. The video showed the theft suspect holding up her Oscar up proudly.http://bit.ly/2HF96wehttps://tinyurl.com/y8aecxud

for deftly directing unmatched video coverage of two major stories in Asia. Amid recent clashes in Hong Kong, Wober was fully committed to coverage on July 1, the anniversary of the territory's 1997 handover. But he was also keenly aware of the unprecedented meeting that took place the previous day between U.S. President Donald Trump and North Korean leader Kim Jung Un at the demilitarized zone between the two Koreas. Wober had asked Pyongyang for video reaction from the North Korean capital. While monitoring the building tension on the ground in Hong Kong, he checked in with the team in North Korea, coordinating the video feed from Pyongyang. As a result, only AP was able to deliver North Koreans’ reaction on video. And while working the two stories, Wober accommodated an interview request from client Sky News, describing the tense situation in Hong Kong.

As an already long day wore into the evening of July 1, hundreds of Hong Kong protesters smashed their way into the territory’s legislature, vandalizing the main legislative chamber before being cleared by police firing tear gas into the crowd. Wober and another member of his crew stayed on to deliver hours of powerful live and recorded video unmatched by competitive agencies. https://bit.ly/2RNfGY2

teamed up to obtain exclusive video of police confronting a beheading suspect outside Paris.

Macpherson, senior field producer, Paris, was coordinating video coverage Saturday after the horrific news that a teacher had been beheaded the previous day. She was working with AP freelance video journalist Patrick Hermansen, who had been sending live video all morning outside the school where teacher Samuel Paty had held a class discussion about the Charlie Hebdo-published caricatures of the Prophet Mohammed.

Juggling live and edited coverage, Macpherson saw that phone video had surfaced in local French media, shot from a home, on which police can be heard screaming at the beheading suspect to throw down his weapon and get down. A short time later, you can hear, but not see, police shooting the man and killing him.

Macpherson knew instinctively that our best chance to get this video was through old-fashioned shoe leather reporting. She had Hermansen stop everything he was doing to try to pinpoint the the house from which the amateur video was shot. Going house-to-house, Hermansen eventually found the the right one and put the owner of the video on the phone with Macpherson, where they negotiated an agency exclusive for AP.

Dozens of customers used the exclusive video, including some key clients such as EuroNews, Sky News, Al Jazeera and Russia Today. https://bit.ly/3jiJAzghttps://bit.ly/2ITiz9r 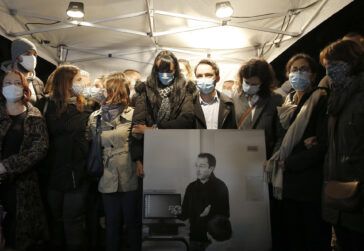 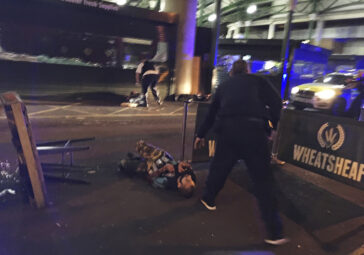 collaborated to give the AP an agency exclusive with video of Sen. Ted Cruz at Cancun’s airport as he was returning to the U.S. amid the backlash over leaving Texas during the deadly winter storm.Triboulard, senior producer in Mexico City, had alerted Rojas about the potential scandal brewing in the U.S. and Rojas, freelance Cancun video journalist, immediately began reaching out to local contacts after images started circulating on Twitter purporting to show Cruz en route to Cancun with his family. After hearing the senator was booked on a return flight early that afternoon, she rushed to the airport and was there when he showed up to check in. Rojas followed the visibly annoyed Cruz through the terminal to the security checkpoint, getting not just video but also eliciting comment from the senator, who said that he was headed home to work on helping Texans. Cruz’s comments were immediately included in the AP’s text story. A competitive agency had to obtain video of Cruz from its Mexican partner, Telemundo, moving it more than an hour after AP’s fast file. https://bit.ly/2ZSVsRf 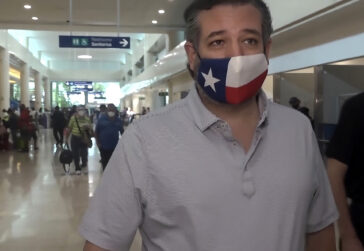 for coverage of the protests against fuel taxes and overall discontent with President Macron’s policies featured a day of dramatic live coverage of the demonstrations as they spiraled into violence along the Champs Élysées. Speed in editing these dramatic images was important, but AP stood out for its hours of continued live coverage from roaming teams, and two top shots, much closer to the action than our competitors. Other formats, notably photos, performed admirably, but the work of APTN video journalists Alex Turnbull, Paris, and Berlin-based Mstyslav Chernov deserves special mention. https://bit.ly/2DTyTlNhttps://bit.ly/2P80sdfhttps://bit.ly/2DTsMhe 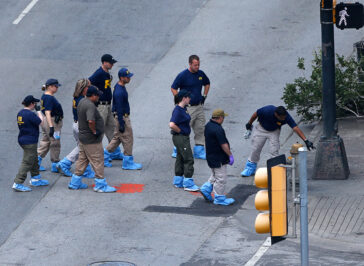 for anticipation, cool wits and presence of mind to secure for AP the only live international video of the fiercely competitive arrival in South Korea of the younger sister of North Korean leader Kim Jong Un for the Olympics. They pre-positioned a LiveU unit at the train station at the airport, rather than waiting outside the airport with most of the media pack, a gamble that allowed AP to get the first pictures of Kim Jo Yong’s historic arrival. Yong Jun at the last minute won an argument with officials to be allowed to record the arrival live, putting AP more than one hour ahead of its closest international competition. https://bloom.bg/2ExG7gh

When the Taliban overran Kabul on Aug. 15, no one in the city knew if the Taliban would resume the brutal practices that carried them to power in 1996 — or would they show some restraint?

Kabul video journalist Ahmad Seir and photographer Rahmat Gul remember the previous Taliban rule, but like their AP colleagues, they were determined to record history. The pair took to the streets. Despite being beaten with rifle butts at a Taliban checkpoint near the airport, they persisted, eventually gaining the trust of Taliban fighters at a checkpoint near AP’s office. Seir and Gul went on Taliban patrols, delivering unique video and photos of the militiamen now in command of Afghanistan.

Those rare images, along with spot features that included daily life in the capital and an interview with a female activist now in hiding, played at the very top of AP’s offerings for the week and reflected the tireless efforts of everyone in AP’s Kabul office who pushed aside their own fears and personal concerns to continue reporting in all formats.

For their historic and important work, thorough professionalism and unbound bravery, Seir and Gul share AP’s Best of the Week honors. 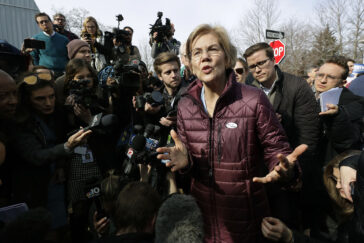