AP Portland, Oregon, reporter Gillian Flaccus has long followed a simmering issue in the Klamath River Basin, a swath of rural agricultural land in Northern California and southern Oregon that is ground zero for the fight over an increasingly precious resource in the American West: water. Amid extreme drought in the region, the U.S. government has stopped irrigation to hundreds of farmers for the first time in history, while Native American tribes along the 257-mile Klamath River are watching fish species hover closer to extinction. The farmers face ruin and tribes worry their culture will vanish.Flaccus has developed deep sources with area farmers as well as tribal members and recently spent nearly a week in the remote area with freelance photographer Nathan Howard documenting an issue that would have been unthinkable just a few years ago. Working with New York photo editor and digital storyteller Alyssa Goodman, they produced a sweeping, striking all-formats package that showed the pain on both sides as people begin to realize the water may not be coming back. The package was among AP’s most-viewed stories for Friday. For immersive journalism that explores the human consequences of drought in the U.S. West, Flaccus, Howard and Goodman receive this week’s Best of the States award.

used the Freedom of Information Act and on-the-ground reporting in the Texas Panhandle to reveal a new Dust Bowl brewing on farmland above the nation’s biggest aquifer — and the halting efforts to stave it off.Farmers, communities and researchers have long known that groundwater in the Ogallala aquifer was steadily declining due to irrigation and might not recover. But while researching a story about disappearing prairie grasslands, Webber discovered that both issues were colliding to create another challenge: As climate change is making rainfall scarcer, farmland is blowing away just as it did during the Dust Bowl.Webber, a member of AP’s global environment team, talked to researchers who warned of huge farmland losses, and she traveling to the Panhandle town of Muleshoe where she told the story of farmers planting native grasses to preserve terrain as their wells struggle to produce water. She also reported that the U.S. Department of Agriculture had identified a Dust Bowl zone where farmers would receive extra money for grasslands conservation, and spent months prying loose government data showing that not all farmers were embracing the program.Webber’s comprehensive and engagingly written narrative, with photos by freelancer Mark Rogers, vividly captured the new Dust Bowl threatening an important agricultural region, and the efforts to keep farmers on their land. https://aplink.news/6or 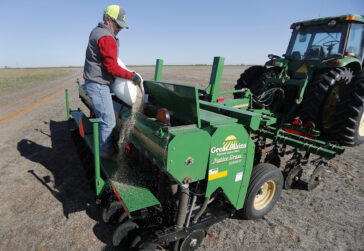 As wells dry up in parched US West, AP reports on residents now without running water

The extreme drought in the American West has already taken a dramatic toll. And now, near the Oregon-California border, as many as several hundred wells have dried up in the past few weeks, leaving dozens of homeowners in the parched region with no running water at all. Reporter Gillian Flaccus and freelance photographer Nathan Howard documented the residents’ plight and the challenges facing authorities responding to the situation.

Flaccus used sources she had built in months of reporting on the dire conditions in the Klamath River Basin, convincing people to let Howard depict their hardship over water in photos and video. Digital storyteller Samantha Shotzbarger then weaved all the elements into a compelling multimedia offering. The story drew widespread play in the U.S., especially in the West.

For continuing to shine light on the effects of the drought afflicting the U.S. West, Flaccus, Howard and Shotzbarger win this week’s Best of the States award. 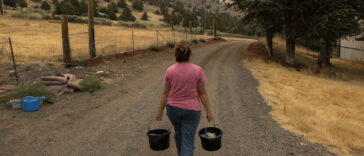