AP staffers are often called the “Marines of journalism.” First in, last out.

Our small New Zealand team of Mark Baker and Nick Perry showed what that looks like as they responded to horrific mass shootings at two mosques. Their swift response securing early, definitive images and witness accounts laid the foundation for the AP’s dominant, agenda-setting coverage of the tragedy in the hours and days that followed.

Baker, the Southeast Asia photo editor known widely as “Crusty,” lives in Christchurch, where the attack happened. He heard radio reports of a possible shooting at a mosque and quickly alerted Perry, the Wellington correspondent, to get words on the wire. Baker headed immediately to the scene, where his early images of survivors became the definitive shots of the tragedy.

Back in Wellington, Perry aggressively filed on breaking developments before going to Christchurch, where he scored another major win for AP by interviewing an Afghan refugee who would be hailed as a hero for confronting the gunman, likely preventing more deaths.

Asia quickly deployed reinforcements, with cross-format teams ensuring AP kept up its advantage on the ground while colleagues from afar kept the story fresh as Asia slept.

For their quick response that showcased AP’s fundamental advantage when news breaks across the world, Baker and Perry share AP’s Best of the Week award. 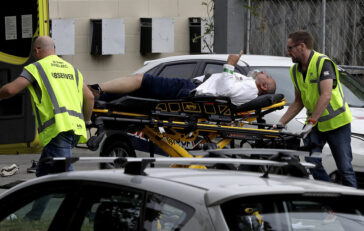