What’s the value of Prince’s estate?

for calculating the first specific estimate of Prince’s estate and showing the size of the fortune expected to be shared by the musician’s siblings and half-siblings. http://nyti.ms/2gV54WG

Getting the real story out in the Philippines

The Philippine defense secretary said it, and many major papers and news agencies ran with it.

China, the cabinet official said, had pulled its coast guard vessels out of Scarborough Shoal, a chain of reefs in the South China Sea that's at the center of a territorial dispute between Manila and Beijing. It appeared an astonishing diplomatic victory for new President Rodrigo Duterte just days after he visited China.

To Jim Gomez, AP's chief correspondent in Manila, it all seemed a bit too remarkable _ and he pushed officials to back up their claim. Within days, they clarified: Chinese vessels had not left the disputed reef, but had allowed in Filipino fishermen who had been denied access for years.

The story resulting from Gomez' persistent questioning debunked a key government claim and earns the Beat of the Week. 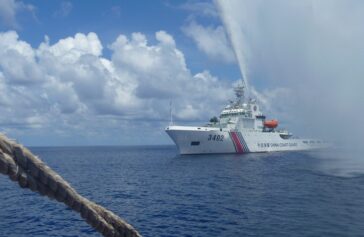 teamed up to provide a science-based reality check to the pope’s planned trip to Iraq. Their story raised questions about how the Vatican can justify going through with the trip during a global pandemic. Chief Vatican correspondent Winfield had been preparing a preview on the Iraq trip and Christian-Muslim relations, but while interviewing experts she realized that the virus issues would dominate that story. Instead, she and Baghdad colleague Kullab hustled to put together a weekend piece focused exclusively on the virus, adding a valuable story to AP’s planned trip line-up.Beyond the obvious risks involved in any mass religious gathering, the story also raised the more problematic optics of having a vaccinated papal delegation descend on a country where the virus is surging, the vaccine campaign hasn’t even begun and where an already fragile health care system has been weakened by war and economic crises. The story was well timed, given the day it moved the pope’s own ambassador to Iraq tested positive. https://bit.ly/2O0EcHD 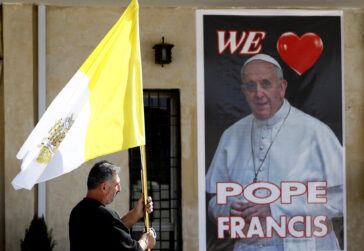 With coronavirus cases surging in Texas and other states, AP journalists David J. Phillip, John Mone and Nomaan Merchant went beyond the daily numbers to show the reality inside a small Houston hospital. In a gut-punch story that landed in newspapers and on nightly newscasts, the trio’s work included the last moments of a woman’s losing battle with the coronavirus.

But the package – Phillip’s photos, Mone’s video and Merchant’s text story – captured more than just a moment. It showed, with sensitivity, the grim realities almost certainly facing frontline workers in hospitals around the country.

Reaction to the story was massive. It was widely used in all formats by broadcast, print and online outlets in the U.S. and beyond. The video alone was the most-used U.S. story of the day – to a degree rarely seen.

For compelling, empathetic and revelatory storytelling from the frontline of the coronavirus fight, Phillip, Mone and Merchant win AP’s Best of the Week award. 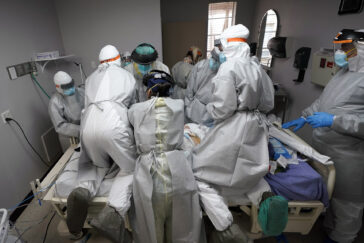 teamed up on a timely package examining racial gerrymandering and how it disenfranchises thousands of Black voters in Alabama.With the U.S. Supreme Court hearing arguments in a case challenging the state’s Republican-drawn maps, and redistricting likely to factor into the 2022 midterm elections, AP journalists used on-the ground reporting, data analysis and experience at the high court to shine a light on the consequences of Alabama’s highly gerrymandered districts.The result was a timely all-formats package on how the cynical practice has largely robbed Black residents in Alabama of their political voice.Read more 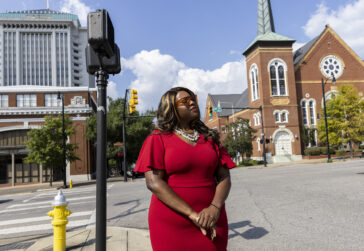 visited Eutaw, Alabama, to better understand the issue of viability — a key word in the superheated debate over abortion — as experienced by families who know what it means to have a baby born at the edge of life.Ungar, who has covered maternal and newborn health for years, knew doctors were getting better at keeping very premature babies alive. She reviewed data and research, interviewed physicians and was connected to Michelle Butler who was in just her fifth month of pregnancy when she she gave birth to twins, including Curtis, the world’s earliest surviving premature baby.Butler let the all-formats team of Ungar, Wang and Dill into family’s life. What emerged was an emotional narrative of extreme joy and profound loss, explaining the science and ethics involved and bringing deeply reported, balanced, real-world context to one of the biggest, most provocative issues of the year.Read more 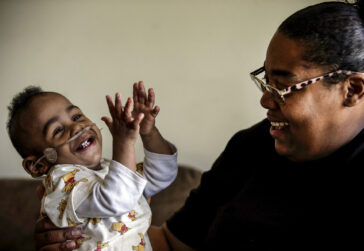 The real revolution in North Korea: the rise of consumer culture

for examining the rise of a new consumer culture, a little-noticed revolution under way in North Korea. It includes buy-two-get-one-free sales and consumer loyalty cards. http://bit.ly/2v4QrrY

worked with colleagues across the United States when a historic blizzard whipped up devastation in Buffalo, New York. They combined to get real, on-the-ground stories and visuals of survivors. Thompson was snowed in at her home, but she was able to help run the story and report the chilling number of deaths in a city so accustomed to monster snowfall.Read more. 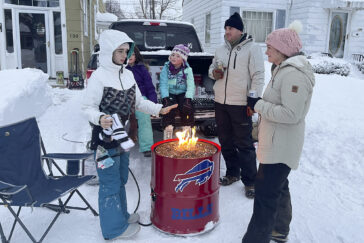 Take a virtual reality trip on the Navy's $12.9 billion aircraft carrier as it prepares to launch

for putting together an exclusive virtual reality tour of the Navy's next-generation nuclear aircraft carrier, the USS Gerald R. Ford, as it prepares for launch at Newport News Shipyard in Virginia.

for teaming up for an exclusive analysis of the data behind HUD Secretary Ben Carson’s proposal to change the rent formula for federally subsidized housing, showing the plan would raise rents an average of 20 percent in large metropolitan areas. Carson retreated from the plan after the story was published. https://bit.ly/2JVlvRF

It started with a tip about tenants being harassed at a cluster of New York apartment buildings owned by Jared Kushner's family.

Bernard Condon, a New York-based business writer, began reporting the story last year, visiting buildings and interviewing the tenants, some of whom told similar stories of being subjected to loud construction at all hours, dust, rodents, lead paint in the air and heat suddenly shut off in the winter. Then, some were approached with offers of money to get them to move so the company could install higher-paying tenants.

But the tip did not truly develop until a tenant advocate source told Condon that Kushner Cos. had filed false paperwork for two buildings elsewhere in the city that made it easier to harass tenants during construction. Further, the organization had filed paperwork saying it had zero rent-regulated tenants in buildings throughout the city when, in fact, it had hundreds.

If the Kushner Cos. had disclosed those rent-regulated tenants, it could have triggered stricter city oversight, including possibly unscheduled "sweeps" on site by inspectors to keep the company from harassing tenants.

For dogged reporting that exposed the falsehoods of a company led by the president's son-in-law and trusted adviser, Condon earns the Beat of the Week. 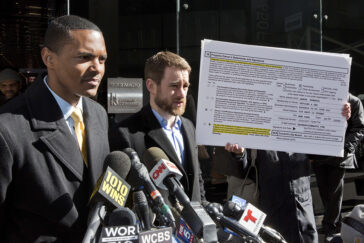 Kushner Cos. owes NYC $500K in fines – and counting

for his exclusive report that the Kushner family real estate business has amassed over a half-million in unpaid fines for New York City sanitation and building violations.https://bit.ly/2x977gihttps://bit.ly/2CNbWly

for finding that the Securities and Exchange Commission late last year dropped its inquiry into a financial company a month after it gave White House adviser Jared Kushner’s family real estate firm a $180 million loan. http://bit.ly/2FcyNHL

teamed up on quick, resourceful coverage of the massive gridlock on Virginia’s snowbound Interstate 95, reporting in all formats on the plight of stranded drivers while fact-checking state officials in real time.With the highway virtually inaccessible, journalists Gallion, Kunzelman, Walker and Finley used social media to land interviews with stranded motorists who waited hours for food, saw little in the way of law enforcement and struggled to conserve fuel amid frigid overnight temperatures.Richmond reporter Rankin, meanwhile, interviewed Virginia’s governor, pressing him on why he hadn’t activated the National Guard ahead of the storm. Photographer Helber delivered aerial images showing hundreds still stranded more than 24 hours in, important documentation as the state refused to estimate how many were trapped.The result was a mainbar, deftly assembled by Richmond’s Lavoie from a variety of feeds, racking up heavy play and readership numbers. A sidebar by Finley on one family’s plight kept also scored high reader engagement. Many Virginia news outlets used AP’s content as their top online offering. In a follow-up, Rankin and Springfield, Virginia, correspondent Matt Barakat reported on early missteps in the state and county response. With help from AP reporters in Ohio, New Jersey, Oregon and Georgia, the piece also recapped similar incidents elsewhere to evaluate Virginia’s handling. Other news organizations couldn’t easily or quickly match the story, demonstrating AP’s unique reach.https://aplink.news/8kihttps://aplink.news/egxhttps://aplink.news/3r6https://aplink.news/1cchttps://aplink.video/kq2https://aplink.video/yiq 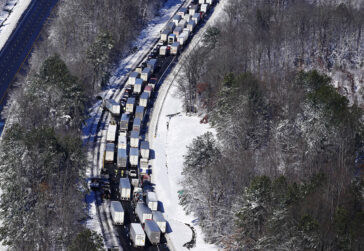 for being first to report Interior Secretary Ryan Zinke’s plan to realign the department in a way that advanced energy development on public lands. http://bit.ly/2t90rQs