Brazil sportswriter Mauricio Savarese had been preparing for the death of soccer legend Pelé for months, if not years. When it happened, he and his colleagues from all formats delivered a huge win for AP.

Savarese long had been building sources close to Pelé, from among his current and former agents, friends and family of the three-time World Cup winner considered by many as the greatest player ever.

The 82-year-old Pelé was hospitalized in November to treat ailments related to colon cancer. Through sources, Savarese learned that Pelé's condition was critical and that his death could occur at any minute. Colleagues across all formats mobilized to put finishing touches on the preparedness, from the main obituary to stories looking at every aspect of Pelé's life and accomplishments, to video, lives and photo packages.

For extraordinary preparation and source development to beat all competitors on a sports story of major importance globally, Savarese earns Best of the Week – First Winner.

for using his longstanding position as one of the best-connected writers in women’s basketball, obtaining exclusive notice that the WNBA and CBS had reached a deal to put the league on its sports cable channel, a huge victory for the struggling sports league. https://bit.ly/2W4QVIb

for a thoroughly reported story on the struggles that compulsive gamblers have with burgeoning sportsbook advertising. Parry’s credibility – and meticulous, grinding beatwork – helped him earn the trust of more than 50 people with gambling problems, gaining insights rarely seen in betting stories. The results not only enhanced the story on betting ads, it set AP up for future stories that the sports gambling team is working on related to broader issues of gambling addiction. https://bit.ly/2QNmhRF

The Next One? Sports launches hub and multiyear plan for exclusive reporting on top hoops prospect

While books and movies have shed light on the world of big-time amateur basketball, no one has published stories along the way – until now. With the first story in a series, Detroit sportswriter Larry Lage and others in a team from Sports established AP as the authority on news about Emoni Bates, a 13-year-old who stands at 6-foot-7, just started the eighth grade and is primed to be the biggest basketball prospect in the United States. The goal is to understand the high-pressure world of college basketball recruiting by following a single promising player’s path.

For their strong, revealing work, Lage, Householder, Sancya and Litke share this week’s Best of the States prize. 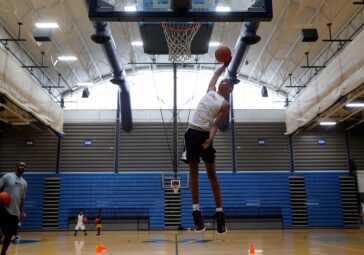 Jon Krawczynski and Tim Reynolds, for keeping AP out front during NBA free agency, combining for 28 bylines on trades deals, including news that Blake Griffin would stay with the Los Angeles Clippers on a $175 million five-year contract.

AP reporting examines lack of diversity in the NHL

brought attention to the lack of diversity in the NHL — a league 84% white — with a set of spot stories, interviews and analysis.Sports writer Wawrow had started reporting on diversity in the NHL as the league was preparing to release a “race report card.” In advance of that report, AP published Wawrow’s widely played story quoting a Black player who blasted the league’s lack of progress on diversity.AP also obtained a copy of the NHL’s report before other news organizations, setting up fellow sports writer Whyno for a full story, including interviews, on the day of the release. He then followed with an analysis piece on the league‘s study.Read more 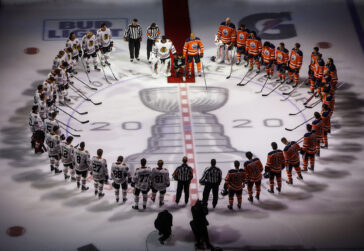 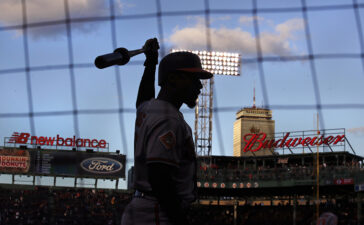 reported on an overlooked angle in the saga of NFL quarterback Deshaun Watson, who was fined and suspended for 11 games after he was accused of sexual misconduct with a massage therapist. Walker examined the impact Watson’s case and the wave of coverage surrounding it has had on the massage therapy profession, which has long battled stigmas and misconceptions.Pro football writer Walker covered a national convention of massage therapists, coincidentally held just a block from the stadium where Watson’s Cleveland Browns will play. Convention attendees were initially reluctant to speak with her, but Walker used her familiarity with massage therapy to get them to open up about the Watson case and other challenges to the profession. She also made video and photos for the multiformat package which played widely in North America.Read more 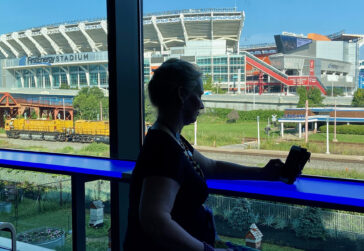 Money madness: AP analyzes, how much is that NCAA berth worth?

It’s no secret that the NCAA college basketball tournament is big business. But just how big, and how has the pie been divided?

Complicating their task was the fact that the NCAA referred to payments with a complex “unit” formula, while 32 different athletic conferences had their own rules for distributing the funds back to schools. Russo peppered the NCAA with questions, ultimately getting detailed numbers back to 1997. Fenn parsed tournament results to quantify wins and bids that qualified for payment under the system.

The work led to several stories by Russo and his colleagues in Sports detailing the money side of the annual tournament, including diminishing shares for smaller conferences, an explainer on the system itself and the value of the final invitations to the field. Fenn also collaborated on a data distribution for members doing their own stories focused on individual schools, as well as a robust interactive.

The AP-exclusive stories drew extensive play in the heat of March Madness, showcasing the power of AP when we think ambitiously and outside the box, even around annual events already in the glare of the media spotlight. For their outstanding work, Russo and Fenn win AP’s Best of the Week. 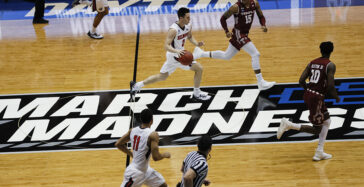 for getting exclusive details from the French police on a growing tennis match-fixing scandal in Europe. Leicester revealed the names of four players being held and details of the investigation into the “Maestro,” an Armenian based in Belgium who is the alleged ringleader of a gambling syndicate suspected of fixing hundreds of matches and paying off more than 100 players from around Europe.https://bit.ly/2WiPfuShttps://bit.ly/2FNlJbV

for his exclusive interview with Carl Grove, a 90-year-old record-breaking cyclist who is thought to have become the oldest person to fail an anti-doping test when he tested positive for a powerful steroid at the U.S. Masters Track Championship. Grove’s explanation was that he had eaten meat contaminated by a livestock steroid. https://bit.ly/2QSEFqO 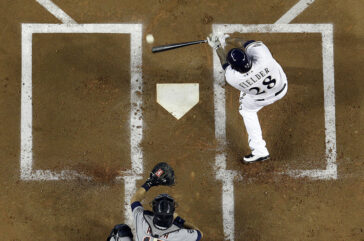 for an exclusive report about the NHL investing in China and for breaking the news that the U.S. women's hockey team had ended a boycott launched over a wage dispute. http://apne.ws/2nd1wTV

gained exclusive access to a tennis program in California’s San Quentin State Prison, producing a distinctive enterprise piece on sports behind bars.Bay area sports writer McCauley, a former college tennis player, had been invited to play tennis with inmates and requested permission from prison authorities to write about the program, which pairs inmates with a player from the outside community. She and photographer Vásquez were allowed into California’s oldest prison twice — McCauley as a player and reporter, and Vásquez to capture images of the program and the inmates’ stories.The result was an engaging account of a sports program seeking to build a stronger sense of community among inmates, as well as the connections they forge with players from the outside the prison.Read more 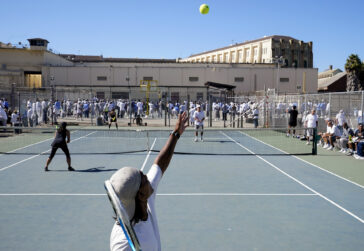 for deflating some of the hype around the Floyd Mayweather-Conor McGregor boxing match, supposedly the hottest ticket in sports. Dahlberg reported exclusively that thousands of tickets were still available for the fight. https://apnews.com/838bfed9855c4fe9951a25605c506ebc