AP responds to US tornadoes with sweeping, distinctive all-formats coverage

When a tornado warning sounded Friday night, AP’s Appalachian staffers scrambled to find whatever information they could in the dead of night. By early Saturday morning it had become clear Kentucky was going to be the epicenter of one of the most powerful tornadoes to hit the region in recent memory.Staffers responded quickly in all formats, including the first live video from the devastated town of Mayfield. Coverage included residents’ wrenching accounts of survival and loss, and powerful visuals, but there was also an important pause in AP’s coverage: Many news outlets breathlessly reported the governor’s grim prediction that as many as 70 people may have died in the collapse of a candle factory. AP was more cautious, preserving its reputation for accuracy when the actual toll came in much lower.AP’s mainbar text stories, photos and video — live and edited — all earned heavy play.

When tornadoes tore through Middle Tennessee in the early-morning hours of Super Tuesday, AP’s staff deftly pivoted from preparing for the state’s primary to covering a natural disaster.

From first light on Tuesday and throughout the day, Nashville and Memphis staffers delivered compelling all-formats coverage of the devastation that left at least 24 dead statewide. The team also connected the disaster to the primary, monitoring the impact on voting.

Strong aftermath coverage followed, including a presidential visit on Friday and well-received pieces on recovery efforts and a worship service at a damaged church. With out-of-state staffers and the entire South Desk contributing to the coverage, the sustained effort showed the AP at its best.

There’s a real difference between straight aerial photography and the bird’s-eye view that AP’s audience had of the destruction after a series of tornados touched down in western Ohio late on Memorial Day. Using a drone, Cincinnati photographer John Minchillo and video journalist Angie Wang provided those images from a rare perspective – both still photos and video – showing residents coping with the wreckage and sorting through their gutted homes.

The resulting video coverage was our overall top U.S. video story for the week, and Minchillo’s still photos were widely played, including front pages of the Washington Post and Wall Street Journal. Two of his photos appeared in NBC’s The Week in Pictures.

From small details to sweeping landscapes of destruction, their dedication, teamwork and speed of delivery make John Minchillo and Angie Wang this week’s Best of the States winners. 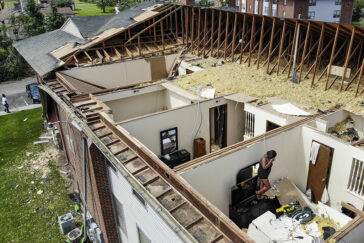 obtained a stunning family photo in the aftermath of tornadoes that tore through the South and Midwest. That image, combined with Hanna’s reporting and a video interview, tells the wrenching story of a young storm victim, 9-year-old Annistyn Rackley, who died when a tornado destroyed the family’s Missouri home. Even amid AP’s remarkable body of work on the storm, this story stood out.Topeka, Kansas, correspondent Hanna had run across the name of Annistyn’s aunt in a routine member story about a vigil for storm victims. Through Facebook sleuthing he eventually found the aunt, Sandra Hooker, who said, “My heart is broken, but I will help you in any way I can.”In an initial conversation with Hooker, who is close to the Rackley family, she mentioned receiving a photo by text shortly before a tornado blew the Rackleys’ home apart. The photo shows Annistyn and her sisters taking shelter in a bathtub as the storm approached; Annistyn is holding her favorite doll, MawMaw. Fifteen minutes later the home lay in ruins and Annistyn was dead.Hooker wanted to honor Annistyn’s memory and secured the Rackley family’s permission for AP to use that photo and others. She also did an interview with Hanna by Zoom, one of several follow-up discussions they had.Hanna’s moving one-man, all-formats coverage — his story, the photo of Annistyn and his interview with her aunt — was among AP’s top enterprise stories in the wake of the storm, with strong play across the U.S. and internationally.https://aplink.news/fwvhttps://aplink.video/bpo 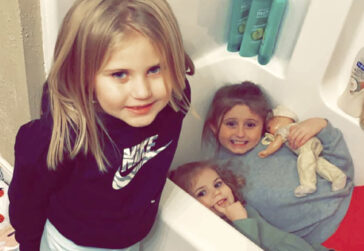