for breaking the news about a proposed House bill that would cut disaster relief money to help finance President Trump's border wall, and being first to report the amount of money Trump would request for Harvey aid. http://ti.me/2gNUbaZ

for exposing that French tycoons and companies have failed to pay promised money to rebuild Notre Dame Cathedral. Almost $1 billion was promised by some of France’s richest and most powerful families and companies in the hours and days after the inferno, but a spokesman said none of that money has been seen, as the donors wait to see how the reconstruction plans progress and how their money will be spent. Adamson found that small American and French donors have so far been paying the bills instead. https://bit.ly/2wZFiHB

Promises, cash for making protective gear in US fall flat

delivered a distinctive accountability story, finding that U.S. governors’ promises to produce personal protective gear domestically remain unfulfilled, despite tens of millions in taxpayer money to support the proposals.Missouri-based state government reporter Lieb identified at least $125 million in PPE production grants to more than 300 business in 10 states but found that most of the companies were leaving the business because they couldn’t find buyers. Company executives told Lieb that production was again going overseas, potentially putting U.S. supplies of protective gear at risk in a future pandemic.Read more 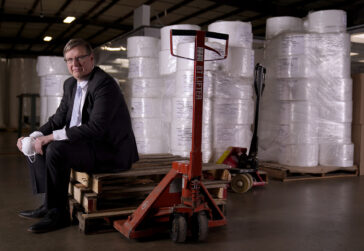 AP analysis: FEMA rejects appeals worth $1.2B over a decade

for a review that found that hundreds of communities and organizations over the past decade got far less money for disaster relief than they were told to expect.http://bit.ly/2ymdgsbhttp://bit.ly/2zyW7sM

for providing evidence that a political operative cooperating with the Mueller probe was involved in the secret funneling of foreign money into the U.S. political system. https://bit.ly/2pS18IR

for investigating Texas' $1.6 million contract with an anti-abortion group and finding the state didn't get its money's worth; the state’s House ethics chairwoman launched an investigation. http://bigstory.ap.org/article/f7645d59944d47228f2...

US sent $221 million to Palestinians in Obama's last hours

for breaking the news that the Obama administration, in its final hours, sent $221 million to the Palestinian Authority, enraging congressional Republicans, who had been holding up the money intended for humanitarian, security and other aid. http://apne.ws/2jRHgEr

Fees Meant to update 911 system get diverted to other uses

for a government accountability story that showed why New York state's 911 system lags behind other states in modernizing to handle cellphones: Over the past five years, lawmakers have diverted an estimated $400 million, or about 42 percent of the surcharge money raised for the upgrades, to the state’s general fund. http://wapo.st/2ekp2Ji

When investigating politicians, the adage goes, “follow the money.” But it is equally important to follow the meetings. for her APNewsBreak detailing how money intended to make sure fish was safe to eat following the BP oil spill instead went to things like iPads, cameras and now-missing fishing equipment. http://apne.ws/2dlSaAR

Warring sides in Yemen are both exploiting deadly cholera

for uncovering how both sides in Yemen’s civil war have sought to profit from the U.N. campaign against the world’s biggest cholera outbreak, skimming money from treatment programs and, in the case of the Houthi rebels, blocking badly needed vaccines in an attempt to wrest concessions. https://bit.ly/2IBCfMK

for months of source work to break the story that a once-standout DEA agent known for lavish spending was arrested on charges of conspiring to launder money with a Colombian drug cartel he was supposed to be fighting. Their exclusive on the arrest came a year after they first broke the story of the alleged wrongdoing. https://bit.ly/2T60s2l Like an episode of ‘Narcos’: Rogue DEA agent in Colombia conspires to steal millions

for their APNewsBreak on the biggest scandal in the DEA’s recent history, detailing how a rogue agent in Colombia teamed up with a top money launderer to allegedly steal $7 million over six years. The story, built on sourcework and solid reporting, was the second-most read on the APNews app on a Trump-dominated news day, and on its second day was still garnering 35,000 readers. In Colombia, it was front-page news and spurred a police investigation into the rogue agent’s Colombian wife. https://bit.ly/2FZtPgD

for breaking the story of how a Texas town was given a federal contract to operate a controversial family detention and in turn gave a hefty management contract to a private prison company, retaining a portion of the money for itself. https://bit.ly/2JjTkJx