How hundreds of Texans could have voted improperly

for his exclusive report on how more than 500 Texas voters may have voted improperly during November’s presidential election, and that most would likely face no criminal or civil penalties for doing so. http://wapo.st/2m8HuJw

AP: How the legacy of Chisholm, others led to Harris’ nomination

landed an exclusive interview with civil rights figure Hazel Dukes on Rep. Shirley Chisholm’s 1972 run for the Democratic presidential nomination, a first for a Black woman. Dukes, who seconded Chisholm’s nomination, set the tone for Stafford’s multiformat piece, offering an exclusive window into how Chisholm’s legacy folded into the historic vice presidential nomination of Kamala Harris.The timing of the story and Stafford’s inclusion of other key, relevant voices helped set up AP’s coverage of Harris’ remarks to the Democratic convention and elevated the voices of Black women during the DNC. The piece was accompanied by “Inspiring Women,” a video that Stafford narrated.https://bit.ly/2EwQTFlhttps://bit.ly/3hATPPC When police imposed a curfew in Sri Lanka’s capital a day before planned protests demanding the resignations of the country's president and prime minister, AP’s Colombo team knew to expect something big. But what followed on Saturday and subsequent days was unprecedented — a stunning show of public fury over the country’s dire economic crisis and months of political turmoil.

The AP photo and video team was well positioned when protesters stormed the colonial-era presidential palace. The extraordinary visuals, including photos by Eranga Jayawardena and Rafiq Maqbool, and video by Jay Palipane, showed demonstrators taking a dip in the presidential swimming pool and occupying the home of the most powerful man in the country.

For months of planning and legwork to chronicle their government’s dramatic fall, including once-in-a-lifetime visuals, AP’s Best of the Week — First Winner award goes to Francis, Mallawarachi, Jayawardena, Palipane and Maqbool. for examining the unusually harsh and coarse language used in the presidential campaign, especially by Donald Trump and his supporters, and its potential for long-term harm to the U.S. Quoting authorities on political speech and electoral history, he reported that incivility reached new lows in 2016 and may signal worse to come. http://apne.ws/2eDOyKO

analyzed voter turnout and ballot rejection data, finding that the number of absentee ballot rejections is likely to soar in key presidential battleground states this fall – enough that it could tip the balance in a close race. They also found the problem is more pronounced in some urban areas where Democratic votes are concentrated and rejections trended higher during this year’s primaries.

Cassidy and Bajak looked at how many people voted by mail in this year’s post-Covid primaries, the percentage of those ballots that were rejected and the state’s turnout during the 2016 presidential election to project how many absentee ballots could get rejected in the coming election if those numbers remained stable. Their analysis found between 185,000 and 292,000 voters in the seven key states they examined could be disenfranchised. https://bit.ly/3hfnXyP 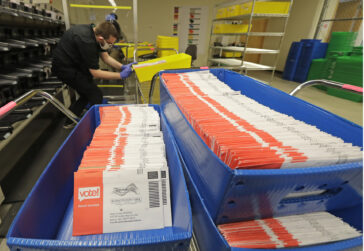 for her photos that captured presidential chief of staff John F. Kelly putting his head in his hands and staring at the ground as he listened to his boss, Donald Trump, delivering a speech to the UN General Assembly in which he threatened to “totally destroy North Korea.” The photo received massive play worldwide. https://yhoo.it/2xQgy5Z

In AP interviews, election emerges as a referendum on race

delivered a bold, smart story exploring how this pivotal presidential election became a referendum on the future of race relations in America.Stafford, a race and ethnicity journalist, gathered a range of local and national voices to examine how the U.S. is being forced to confront systemic racism in an election year in which the coronavirus pandemic, economic uncertainty and police brutality have converged. One of those voices was that of Omari Barksdale, a Black man who was impacted by the police killings of George Floyd and Breonna Taylor. And more personally, he lost his sister to COVID. Detroit photographer Sancya met with Barksdale and captured him in strong portraits that complemented the text story.Stafford also landed interviews with some notable national figures, including civil rights leader the Rev. Al Sharpton who said the “soul of the nation” was “at risk.” https://bit.ly/3p4Kwf5 used her deep expertise on voting procedures, along with strong source work, to report that poorly marked ovals or boxes on mail-in ballots could become this year”s version of the hanging chads from the disputed 2000 presidential election.With tens of millions of Americans filling out their ballots at home and voting by mail for the first time this year, experts anticipate that many of those voters will make mistakes marking ballots, forcing election workers to try to discern their intent. As Cassidy noted, states with a long history of voting by mail have detailed guidelines for processing and interpreting such ballots. But states that ramped up their vote-by-mail efforts this year in response to the coronavirus pandemic do not have that experience, potentially leading to confusion and disputed vote counts. https://bit.ly/3jii45V used sharp planning and fast election day pivots to put AP well ahead of the competition, delivering unmatched live and edited video coverage of the first round of France's presidential election — a vote with implications for Europe’s future.As the election unfolded Sunday, senior producer Schaeffer recognized leading French broadcasters heavily using AP’s morning live feed from voting stations. Seeing the demand, he and the team quickly committed to live coverage throughout the day. That usage by French broadcasters was particularly telling: They chose AP over their own coverage — and crucially, over AP’s major French competitor, a tribute to the broad, balanced coverage which dominated AP’s live offerings throughout the day.Read more Up close, personal reporting on the US political divide

wanted to explore how people on different sides of the political gulf in the U.S. view the election and transfer of power.They found two Maryland residents who represent polar political opposites: one a Trump Republican who has two TVs tuned to conservative media; the other a staunch Democrat eager for the inauguration of Joe Biden. Both are members of a program designed to bridge the nation’s extraordinary political divide.The AP team followed as the pair navigated the turbulent transition between administrations, careful to report fairly while not making their divergent positions equivalent — the journalists made it clear that the facts establish Biden’s win and do not support claims of a stolen election. The all-formats package attracted attention and yes, sparked heated discussion online. https://bit.ly/3ckElj2https://bit.ly/2Yn9r19 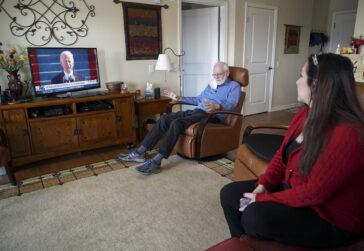 used journalistic savvy and resourcefulness to overcome both an internet ban and AP’s competitors to deliver outstanding all-formats coverage of Uganda’s Jan. 14 presidential election.Uganda had gone to great lengths to discourage international observation of the polls. Just getting into the country with all-important live broadcast equipment required driving into the country at a less-policed border point.And Uganda was widely expected to cut its internet on election day. When it did, reporter Muhumza was unfazed, having wisely filed comprehensive advance copy to colleagues outside the country. He updated with key quotes and details sent by text message.Despite the internet cut, the video team of Kasire and Mwihia noticed that international roaming data was still working. They promptly switched all the SIM cards in their LiveU unit, delivering an incredible four-hours of agency-exclusive live video showing polls opening and heightened security. Authorities eventually got wise and cut off roaming data too.Meanwhile, Delay’s decision to rent a vehicle with black-tinted windows also paid off, allowing him to move around the capital to make compelling photos of security forces without drawing unnecessary attention.Ultimately, the team used its local contacts and managed to negotiate their way into the heavily guarded state broadcaster, where they continued to discreetly file developments for days via state TV’s still operational fast internet — an enormous edge over our competitors who had to rely on much slower communications. The final triumph was to patch and broadcast, live and exclusive, a clean feed of President Museveni's national address on his win.https://bit.ly/39FxH3Chttps://bit.ly/2KEm8l0https://bit.ly/396i1Hy 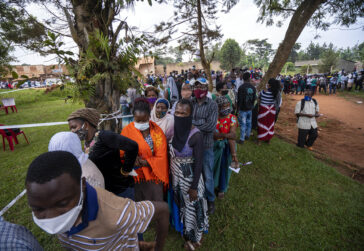 for pursuing an interview with Ugandan pop star Bobi Wine, one of Africa’s leading opposition figures. Wine had long been coy about whether he would become a presidential candidate, but after Muhumuza posed the question repeatedly, the singer finally confirmed he would run against long-serving President Yoweri Museveni – while expressing fear for his own safety. https://bit.ly/2Gr49ZK 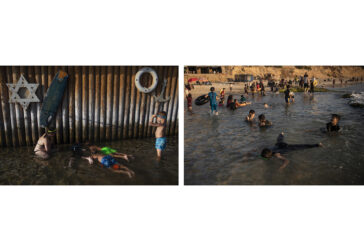